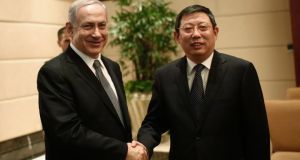 Israeli prime minister Binyamin Netanyahu insisted on his country’s right to defend itself during a visit to China yesterday, after Beijing expressed concern over air strikes on Syria attributed to Israel and underlined its support for Palestine.

Palestinian president Mahmoud Abbas was welcomed by his Chinese counterpart Xi Jinping in Beijing on Monday, while Mr Netanyahu began a visit to Shanghai.

Mr Xi has called for Palestinians and Israelis to renew peace talks that have been stalled since 2010. Mr Netanyahu visited the Ohel Moishe synagogue in Shanghai yesterday, which once served 30,000 Jewish refugees who found shelter in the city during the second World War. He thanked China for its help and said that such aid was no longer necessary.

“Today we have a state of our own, an army of our own,” he said. “We need not beg to be saved. We can defend ourselves.”

The Chinese government had stern words for Israel at the start of Mr Netanyahu’s five-day visit.

“China is gravely concerned about the issue and calls for the involved parties to remain restrained and avoid any actions that might escalate the tension,” foreign ministry spokeswoman Hua Chunying said at a briefing yesterday.

“We oppose the use of weapons. We believe the sovereignty of any country should be respected,” she said.

Mr Netanyahu is due in Beijing today while Mr Abbas left Beijing on Tuesday. This was the first visit by an Israeli leader since Ehud Olmert visited in 2007, and was expected to include the signing of numerous trade deals. President Xi Jinping gave a strong message of support to Mr Abbas, saying the Chinese people’s support of the Palestinian people was “sincere and hearty”.

“China will, as always, support the just cause of the Palestinian people,” he said. China recognised the Palestinian state in 1988, four years before establishing diplomatic ties with Israel.

“Despite turns and twists in peace talks between Palestine and Israel, we believe the dream of the Palestinian people to establish an independent state can come true provided (you) hold the general direction of peace and make unremitting efforts (in your cause),” he told Mr Abbas.

By hosting both the Palestinians and the Israelis, China seems to be positioning itself as a broker for peace in the region.

“China thinks it is of great significance to help facilitate the Middle East peace process, and would like to make positive and constructive efforts in helping resume peace talks between Palestine and Israel,” foreign ministry spokeswoman Hua Chunying told a news briefing.

During his meeting with Mr Abbas, premier Li Keqiang said: “China will continue its own way and make use of its influence to boost Palestine-Israel peace negotiations, which will work for regional and world peace and stability.”