‘The head of military missions told the army to flee. Mosul has been sold to Isis’ 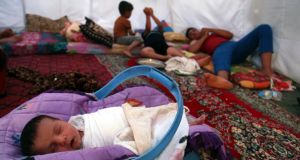 A baby sleeps with his family, who fled from the violence in Mosul, inside a tent yesterday at a camp on the outskirts of Arbil in Iraq’s Kurdistan region. Photograph: Reuters/Azad Lashkari

The Islamist militants’ capture of Mosul, which began Iraq’s slide into a new war, may have been sudden, locals say, but it should not have been a surprise.

On a dusty highway just outside the city, an army truck emblazoned with the phrase “Loyalty to the state” has been abandoned. It is a fitting symbol, one Mosul official says, for the betrayal he and many residents believe was behind the collapse of the army as thousands of soldiers fled without a fight.

“We had known for over a month that militants were massing outside Mosul and so did the army. A week before the attack began, we told them there were some strange movements outside the city. The army gave no reply,” said a tired-looking man at a cafe.

At the last checkpoint between Erbil, capital of Iraq’s semi-autonomous Kurdistan region, and Mosul, Kurdish Peshmerga forces point to a blue ‘Gazprom’ billboard 500 metres away, where they say the control of the Islamic State in Iraq and Syria (Isis) begins.

“The only shocking part is how quickly their army collapsed. I stopped one officer who drove through our checkpoint on a flatbed truck with 15 men. I asked him why he left, why he and his men didn’t have their weapons,” said Haydar Sadiq, a Peshmerga lieutenant.

“He told me, ‘This is all the army I have left. The head of military missions in Mosul has told the army to flee. Mosul has been sold to Isis.”

The sudden fall of Mosul and the continued push towards Baghdad has shocked Iraq and the world and sparked fears that the country could fragment. Initial explanations of Mosul’s fall focused not just on Isis’s surprisingly sophisticated attack but on sectarian fears. The army’s mostly Shia soldiers fled, unwilling to fight for a city of resentful Sunni residents.

Locals and Peshmerga militia say the real reason for the militants’ success was Sunni citizens joining the Isis fighters, and the inexplicable withdrawal of military leaders.

Many people, including Kurdish fighters and the Mosul official, cited the head of military operations, Fareeq Aboud Bandar, a former Baathist, Mahdi al-Arawi, the head of Nineveh’s armed forces, and Ali Ghaydar, the head of Iraq’s ground forces.

No one is sure whether the men were bought off or had other motives. Kurdish forces say the men fled towards Erbil.

At a crowded Peshmerga checkpoint on the road to Erbil signs of the chaos from the first few days of Isis’s takeover remain. Trampled high heels and children’s shoes litter the ground, remnants of people who scrambled on to trucks to escape a catastrophe locals believe was long in the making and signals a messy future that could lead to the unravelling of their state.

“The number of Isis fighters that came in were in the hundreds, but they were joined by many more people in black masks,” said Mohammed, a sweet vendor. “Many people were just happy to take up arms. This was the beginning of a Sunni revolution.”

The Mosul official says he was with the local governor on Monday when the militants’ sporadic clashes with police forces devolved into a swift, full-scale takeover. “Isis drove a rigged oil tanker in front of the Mosul hotel and blew it up. Police and army morale crumbled and Isis started to advance. An hour later, the army started to withdraw,” he said.

About 30 minutes later, he said, the top three military officials had fled the city. Soldiers started dropping their weapons and looking for civilian clothes in which to flee.

Residents believe many in the city, long an insurgent stronghold, joined Isis. Some say they were Baathist sleeper cells. Others insist they were Sunni civilians happy to help “liberate us from the army jailkeepers”.

Isis has appointed a new governor for Mosul, Hashem al-Jamani, a former Baathist officer, according to residents and the Peshmerga. Kurdish fighters say their intelligence suggests that Isis has been recruiting to form a military force for the city.

“It’s obvious that the top officers in the army made a deal with the terrorists. Whether it was out of money or conviction, I don’t know. But they’re working to divide this territory,” says Ayyad al-Ghareeb, a young man waiting at the Peshmerga checkpoint.

Most of the residents seem relieved. “After years of oppression by Maliki’s Shia government, of being forced to make it work, I just want to live in peace,” says Layla Daloul, wearing a long black cloak and veil. “The Isis militants are working to get us regular electricity and water, which the government never did. They’ve taken down all the army checkpoints.”