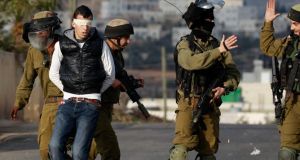 Israeli soldiers arrest a Palestinian during clashes with Israeli troops at a protest against the Jewish settlement of Ofra, in the West Bank village of Silwad, near Ramallah, yesterday. Photograph: Mohamad Torokman/Reuters

The Middle East peace talks are in crisis.

When Israel and the Palestinians agreed, under intense pressure from Washington, to relaunch direct bilateral negotiations last July, US secretary of state John Kerry set an extremely ambitious, some would say naive, nine- month deadline for the sides to clinch an elusive peace deal.

That deadline is fast approaching and although the sides have met about 20 times, in strict secrecy, there is no indication to date that the parties have been able to significantly narrow the gaps on any of the core issues.

In what appears to be an effort in diplomatic damage control, Kerry is now working on bridging proposals, a framework agreement to be endorsed by the sides, that would enable the talks to continue beyond the April deadline.

An indication of the deadlock’s depth came this week when the Israeli newspaper Yediot Aharonot leaked off- the-record statements made by Israeli defence minister Moshe Ya’alon.

He confirmed comments made by senior Palestinian officials over recent weeks to the effect that direct peace talks have not taken place for weeks and both sides were in effect negotiating separately with the Americans.

He also made a scathing personal attack on Kerry, for which he later apologised, describing him as “messianic” and “obsessive,” saying sarcastically that he should just claim his Nobel peace prize and leave Israel alone.

Ya’alon also dismissed the American plan for West Bank security arrangements, drafted by Kerry in an effort to break the impasse in the talks, as “not worth the paper it’s written on”.

According to an anonymous official in the ruling Likud party, quoted in the Israeli media this week, the defence minister merely said out loud what prime minister Binyamin Netanyahu really thinks but could never say, so as not to pinpoint Israel as the obstacle to peace.

Over recent weeks senior Palestinian officials led by President Mahmoud Abbas have made a number of hardline speeches that left little room for optimism that an historic compromise was close.

So what are the contentious issues?

Borders
The Palestinians seek an independent state in the entire West Bank and Gaza. Israel wants to maintain control over four West Bank settlement blocs (about 13 per cent of the West Bank), home to more than 80 percent of settlers; and in return would be prepared to cede some Israeli territory to the Palestinians.

Gaza
Gaza has always been considered an integral part of a future Palestinian state but is currently controlled by the Islamic Hamas, bitter opponents of Fatah, headed by President Abbas, which controls the West Bank. Hamas opposes the peace talks with Israel and insists Abbas has no mandate to negotiate on its behalf.

Security
Israel insists on maintaining a military presence in the Jordan Valley, the eastern border between a future Palestinian state and Jordan. The Palestinians have made it clear that no settlers or Israeli troops can remain in an independent Palestine.

Refugees
The Palestinians want Israel to accept the “right of return” for refugees who fled during the 1948 war. Israel says all refugees must be absorbed into a future Palestinian state.

Jerusalem
The Palestinians want Arab east Jerusalem to be their capital. Israel insists the entire city, including the Arab neighbourhoods annexed by it after the 1967 war, remain the undivided capital of Israel.

Recognition
Israel seeks Palestinian recognition of the state of Israel as the homeland of the Jewish people. Mr Abbas says this will never happen, even if a peace treaty is signed. Jordan has a significant interest in the peace talks, especially in relation to its border with a future Palestinian state, the status of Jerusalem and the fate of the refugees.

Amman reportedly shares Israeli concerns that Islamic militants may seek to enter a Palestinian state via Jordan following an Israeli withdrawal from the West Bank.

Last weekend Kerry met Arab League representatives in Paris in an attempt to win their backing for the US peace drive. However, the nine Arab foreign ministers instead stood firmly behind the Palestinian position, telling Kerry there could be no recognition of Israel as a Jewish state and no compromise on east Jerusalem as the Palestinian capital.

Kerry told the Arab ministers that if negotiations failed he would not hesitate to name the side that “provided concessions and co-operated” with his efforts and the side that “refused to co-operate”.

While both parties appear to be unwilling to make significant concessions, neither wants to lose the “blame game” and be labelled by the Americans as the party responsible for the collapse of the talks.

The most likely scenario is a watered-down, deliberately ambiguous framework agreement that will be accepted by both sides, with reservations, enabling the talks to continue but with little real hope of an end in sight to one of the most intractable conflicts of recent times.