Education to be hardest hit as government moves to slash spending 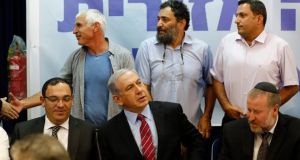 Israel has been presented with a hefty bill for 50 days of war in Gaza, as the prime minister, Binyamin Netanyahu, moved to slash government spending by 2 per cent this year to offset the $2.52 billion (€1.95 billion) cost of the conflict.

With only the Israeli military and domestic intelligence agency Shin Bet exempt from the sharp spending reductions, the area to be hit hardest emerged as the Israeli education system, with critics – including members of Mr Netanyahu’s cabinet – predicting the poorest Israelis will feel the brunt of the cuts.

Among those protesting was welfare minister Meir Cohen, who insisted there was no more fat in his budget to trim.

“From whom will we take? From those who have nothing to put in their children’s sandwiches for school?” he complained on Israeli army radio.

Amid estimates by some economic observers the war may have cost Israel a decline of 0.5 per cent in its growth in gross domestic product, Mr Netanyahu defended the stringent across-the-board cuts before a cabinet meeting in the country’s south yesterday, insisting: “Security comes first.”

The proposed emergency budget reductions, amounting to about $561 million, will help fund a sharp hike in the budget of Israel’s armed forces and Shin Bet, amid estimates that the latest round of fighting in Gaza cost Israel $50 million for each day of the war.

The Israeli budget for this year – even before the war and the latest proposed cuts – had already heralded a bout of belt-tightening that had seen a fierce fight over spending cuts, later reversed, to the Israeli defence forces.

On the Palestinian side, experts have estimated that the bill for reconstruction after the conflict could be upwards of $6 billion and take 20 years to accomplish under the current Israeli and Egyptian restrictions on imports of building materials into Gaza.

The Israeli budget cuts come amid evidence that Israel’s economy – which had already been slowing to a sluggish 1.7 per cent growth in the second quarter of this year, including the key hi-tech sector – had been hard hit by the weeks of conflict, not least tourism.

Mr Netanyahu has also been facing demands to increase the scope of an already-large compensation package for southern Israeli communities close to the Gaza Strip.

Speaking ahead of the cabinet meeting yesterday, Mr Netanyahu insisted: “We are starting to fill in what is lacking in the defence budget. As we saw recently, defence comes before all else.

“We will start to fill in what is missing in the defence establishment. This reflects our understanding of the priorities, with security coming before all else. We did great things, but this requires us to roll up our sleeves to enable the IDF, the Israel security agency [Shin Bet], and the security services to continue to defend Israel effectively.”

The new austerity programme – which had been anticipated – emerged amid continuing criticism by Israelis of Mr Netanyahu and his government, whose approval has plummeted since a long-term ceasefire with Hamas was agreed last week.

The scale of the cuts have been dictated by the insistence of Mr Netanyahu’s finance minister, Yair Lapid, that he will not raise taxes to cover any shortfall.

The disclosure of the scope and potential impact of the proposed cuts came as Israel announced yesterday a land appropriation in the occupied West Bank that an anti-settlement group termed the biggest in 30 years and a Palestinian official said would cause only more friction after the Gaza war.

Four hundred hectares (988 acres) in the Etzion settlement bloc near Bethlehem were declared “state land, on the instructions of the political echelon” by the military-run civil administration.

Israel Radio said the step was taken in response to the kidnapping and killing of three Jewish teenagers by Hamas militants in the area in June. The notice published by the military gave no reason for the decision. – (Guardian service)