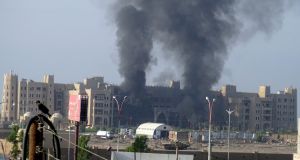 The Al Qasr hotel after it was hit by rockets in Aden, Yemen. Photograph: Stringer/Reuters

Islamic State suicide bombers killed 22 people in attacks on Yemen’s government and its Gulf Arab coalition ally in the port city of Aden and on a Houthi-run mosque in the capital Sanaa on Tuesday, the jihadist group and state media said.

It was the first known direct Islamic State assault on the Yemeni government and the Saudi-led coalition that intervened in the country’s civil war in March against Iranian-backed Houthi forces who had seized large areas of the country to that point.

In Sanaa, seven people were killed in the attack on the al-Nour mosque in the al-Nahda district of the Houthi-controlled capital, the Houthi-run state news agency said.

Claiming responsibility for the Sanaa bombing, Islamic State said in a statement that dozens of Houthis preparing to go to the battlefront had been killed or wounded.

The Sunni militant Islamic State is hostile to both the US-backed Yemeni government and Arab coalition allies, as well as to the Shia Muslim Houthis in Yemen’s complex conflict.

Vice-president Khaled Bahah, who is also prime minister, and cabinet colleagues escaped unharmed from what he said were car bomb attacks in Aden, two of which targeted the al-Qasr hotel.

“Today’s attack does not affect anybody. On the contrary, it binds us together more,” he told a cabinet meeting afterwards in comments carried by Dubai-based al-Arabiya television.

“We had come here to work and we know that there are security gaps . . . But this now prompts us to do more in the framework of reinforcing security in a bigger way by the general security services and armed forces.” – (Reuters)