IS suspected of genocide against Yazidis in Iraq - UN panel 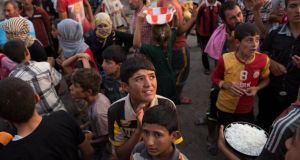 Iraqi Yazidis at the Khanke refugee camp in Dohuk, Iraq. United Nations investigators have cited evidence that IS fighters had sought to wipe out the Yazidi minority in Iraq. Photograph: Lynsey Addario/The New York Times

United Nations human rights investigators have levelled accusations of genocide and war crimes at Islamic State (IS), citing evidence that the extremist group’s fighters had sought to wipe out the Yazidi minority in Iraq.

The investigators reported that the pattern of attacks against the Yazidis, a religious minority living mostly in northern Iraq, pointed to the intention of IS “to destroy the Yazidi as a group”.

Although the report states cautiously that the extremists “may have committed” genocide, one of the most serious international crimes, Hanny Megally, a senior UN rights official, told reporters in Geneva that “all the information points in that direction”.

Iraqi government forces and affiliated militia groups also appear to have committed war crimes, the UN said, pointing to what it called credible accounts of scores of summary killings, torture, abductions and indiscriminate attacks on civilians, including the use of barrel bombs.

“It was quite clear the attacks against them were not just spontaneous or happened out of the blue; they were clearly orchestrated,” said Suki Nagra, who led a team of investigators that compiled the report. Witnesses “consistently reported that orders were coming through, by telephone in many cases, about what to do with them”, she said.

IS fighters forced other religious minorities to convert or flee their villages, Ms Nagra said, but in many instances, even Yazidis who agreed to convert were taken away and executed on orders from more senior figures in the militant group. “There was a clear chain of command,” she said.

Most of the IS fighters were Syrian or Iraqi, Ms Nagra said, but evidence provided by witnesses also suggested “a huge number of foreign fighters were involved” and that they came from at least 10 countries, including from the West.

Yazidi women and girls were abducted and sold or given into sexual slavery as spoils of war, said witnesses who also cited the rape by extremist fighters of two girls, ages six and nine. A pregnant married woman aged 19 told investigators that she had been raped repeatedly over 2½ months by an IS militant claiming to be a doctor, and that he had deliberately sat on her stomach, telling her “this baby should die because it is an infidel”.

Yazidi boys as young as eight were forced to convert to Islam, to undergo training in the use of weapons and to watch videos of beheadings, children who escaped captivity told the UN team.

IS had killed at least 602 members of the Albu Nimr tribe in Anbar province in Iraq, and 1,500 to 1,700 Iraqi service members it had captured at a military base. Some were shot and others beheaded, Ms Nagra said, citing a witness who recounted that the extremists had been “kicking heads around like footballs”.

The investigators also reported numerous accounts of killings, abductions and torture by the Iraqi military and militias. As the fight against IS gathered momentum in the summer of 2014, the militias seemed “to operate with total impunity, leaving a trail of death and destruction in their wake,” the investigators said.

Security forces summarily executed 43 prisoners at a police station in June, and killed at least 70 Sunni civilians in Diyala province in January, according to the UN team. – (New York Times service)