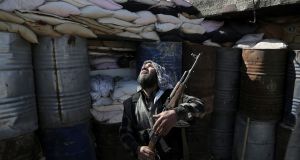 A Syrian rebel fighter from the Islamist Failaq al-Rahman brigade mans a position on the frontline against regime forces in the town of Arbin in the eastern Ghouta region on the outskirts of the capital Damascus. Photograph: Amer Almohibany/AFP/Getty Images

Guns mostly fell silent in Syria and Russian air raids stopped on Saturday, as a cessation of hostilities appeared to hold for its first day, described by the United Nations as the best hope for peace in five years of civil war.

Under the US-Russian accord accepted by Syrian president Bashar al-Assad’s government and many of his enemies, fighting should cease so aid can reach civilians and talks can open to end a war that has killed more than 250,000 people and made 11 million homeless.

Russia, which says it intends to continue strikes against areas held by Islamist fighters that are not covered by the truce, said it would suspend all flights over Syria for the first day to ensure no wrong targets were hit by mistake.

Rebels reported what they described as occasional government violations, and one commander warned that unchecked, the breaches could lead to the agreement’s collapse. A Syrian military source denied the Syrian army was violating the truce agreement.

State media described rocket attacks near Damascus and several deadly attacks by Islamic State. But overall the level of violence was far reduced.

“Let’s pray that this works because frankly this is the best opportunity we can imagine the Syrian people has had for the last five years in order to see something better and hopefully something related to peace,” UN Syria envoy Staffan de Mistura said at a midnight news conference in Geneva.

He said he expected occasional breaches of the agreement but called on the parties to show restraint and curb escalation.

The agreement is the first of its kind to be attempted in four years and, if it holds, would be the most successful truce of the war so far.

But there are weak spots in a fragile deal which has not been directly signed by the Syrian warring parties and is less binding than a formal ceasefire.

Importantly, it does not cover powerful jihadist groups such as Islamic State and the Nusra Front, al Qaeda’s branch in Syria. Islamic State claimed responsibility for a suicide car bomb in Hama province. Nusra has called for redoubled attacks.

Moscow and Damascus say they will continue to fight those groups, and other rebels say they fear this may be used to justify attacks against them.

The truce is the culmination of new diplomatic efforts that reflect a battlefield dramatically changed since Russia joined the war in September with air strikes to prop up Mr Assad. Moscow’s intervention effectively destroyed the hope his enemies have maintained for five years - encouraged by Arab and Western states - to topple him by force.

In early reports of violence, a Syrian rebel group in the northwest said three of its fighters had been killed while repelling an attack from government ground forces a few hours after the plan came into effect. Its spokesman called it a breach of the agreement.

Fadi Ahmad, spokesman for the FSA First Coastal Division in Latakia province said government helicopters had dropped eight “barrel bombs” on the area in the early afternoon. Mr Assad’s opponents have long accused the government of using such bombs - oil drums packed with explosives - to cause indiscriminate damage in rebel-held areas, which Damascus denies.

The Syrian Observatory for Human Rights, a monitoring group, said government forces dropped five barrel bombs on the village on Najiya in Idlib province. The village is controlled by several groups including Nusra Front.

Russia’s Defence Ministry said it would suspend air strikes in a “green zone” - defined as those parts of Syria held by groups that have accepted the cessation of hostilities - and make no flights at all on Saturday.

Sergei Rudskoi, a lieutenant-general in the Russian air force, told a news briefing that Moscow had sent the United States a list of 6,111 fighters who had agreed to the ceasefire deal and 74 populated areas which should not be bombed.

A rebel fighter said government forces briefly fired artillery at a village in Aleppo province, which he said was under the control of the Levant Front, another group under the umbrella of the Free Syrian Army which has backed the truce.

Nevertheless he said the frontline was quieter than before the agreement took effect.

“There is calm. Yesterday at this time there were fierce battles. It is certainly strange, but the people are almost certain that the regime will breach the truce on the grounds of hitting Nusra. There is the sound of helicopters from the early morning,” he sad.

Fighting raged across much of western Syria right up until the cessation came into effect but there was calm in many parts of the country shortly after midnight, the Observatory said.

“In Damascus and its countryside ... for the first time in years, calm prevails,” Observatory director Rami Abdulrahman said. “In Latakia, calm, and at the Hmeimim air base there is no plane activity,” he said, referring to the Latakia base where Russia’s warplanes operate.

Some gunfire had been heard shortly after midnight in the northern city of Aleppo, and there were some blasts heard in northern Homs province, but it was not clear what had caused them, Mr Abdulrahman said.

After years in which any action by the United Nations Security Council was blocked by Moscow, Russia’s intervention has opened a path for multilateral diplomacy while undermining the long-standing Western demand that Assad leave power.

The Security Council unanimously demanded late on Friday that all parties to the conflict comply with terms of the plan. Mr De Mistura said he intends to restart peace talks on March 7, provided the halt in fighting largely holds.

UN-backed peace talks, the first in two years and the first to include delegations from Damascus and the rebels, collapsed earlier this month before they began, with the rebels saying they could not negotiate while they were being bombed.

The government, backed by Russian air strikes, has dramatically advanced in recent weeks, moving close to encircling Aleppo, Syria’s biggest city before the war, and threatening to seal the Turkish border that has served as the main lifeline for rebel-held areas.

Washington said it was time for Russia to show it was serious about halting fighting by honouring a commitment not to strike Syrian groups that are part of the moderate opposition.

1 Gardaí investigating four-lane motorway sulky race
2 A Russian cruiser with ‘cannibal rats’: What other ‘ghost ships’ could be out there?
3 Grave concern in North over London’s new immigration rules
4 DUP pleads with UK to reduce salary threshold for migrant workers coming to North
5 Dublin schoolboy (14) appears in court charged with rape
Real news has value SUBSCRIBE