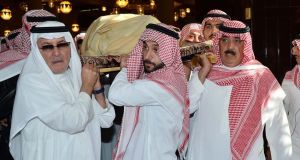 King Abdullah of Saudi Arabia has died aged 90 after a short illness. The news, announced late on Thursday on state television, came after the king was admitted to hospital on December 31st suffering from pneumonia.

His successor is his half-brother crown prince Salman. Yesterday morning the new king vowed to maintain the same approach as his predecessors. “We will, with God’s support, maintain the straight path that this country has advanced on since its establishment by the late king Abdulaziz,” Salman said in a speech broadcast on state TV.

Oil prices surged as markets speculated about a possible shift in the kingdom’s policy of allowing crude prices to fall.

Who is the new Saudi king, Salman bin Abdulaziz Al Saud? Rumours of Abdullah’s death circulated on social media before Saudi TV began to broadcast Koranic verses – often a sign of bad news – and the announcement was made. He was buried yesterday afternoon.

Beyond confirmation that Salman has ascended the throne, lie troubling questions about the succession, the stability of an unreformed absolute monarchy and the prospects for its younger generation of royals at a time of turmoil in the region – including the destabilising crisis in Yemen.

Salman is widely believed to be unwell, with speculation he is suffering from dementia or Parkinson’s disease, though Saudis deny that. He is 79, so there is bound to be uncertainty about his rule.

Stability and continuity are likely to be his guiding principles, at a time of alarm over the rise of Isis in Iraq and Syria, turmoil in neighbouring Yemen, the kingdom’s rivalry with Iran and controversy over its resisting calls for Opec production cuts as the price of oil has plummeted.

In recent months, Salman has begun to play a more active role and has represented the country at important meetings abroad. He also serves as deputy prime minister and defence minister.

Salman was the governor of Riyadh province for years and enjoys a reputation for good governance. He acted as the family enforcer, discreetly settling problems with some of the thousands of royals who live in the capital. He was also active in collecting funds to support the mujahideen who were encouraged to fight the Soviet Union in Afghanistan in the 1980s – Osama bin Laden was the most famous – and he worked closely with the Wahhabi clerical establishment.

Salman stands to be succeeded in turn by prince Muqrin (69), the deputy crown prince, an RAF-trained fighter pilot and former intelligence chief whose prospects are often questioned because he was born to a Yemeni rather than a Saudi mother of “approved” tribal lineage.

US president Barack Obama saluted the late king’s commitment to close US-Saudi ties and offered condolences. “As a leader, he was always candid and had the courage of his convictions,” Obama said. “One of those convictions was his steadfast and passionate belief in the importance of the US-Saudi relationship as a force for stability and security in the Middle East and beyond.

“The closeness and strength of the partnership between our two countries is part of King Abdullah’s legacy,” the statement added.

In Egypt, the government showed its gratitude for Abdullah’s staunch support for the current Egyptian regime by declaring seven days of mourning – four days longer than the mourning periods in the aftermath of other recent deaths. President Abdel Fatah al-Sisi’s office said: “History will never forget his numerous achievements in the defence of Arabism and Islam; acts which he performed with honour, honesty and sincerity, guided by truth, justice, chivalry and courage.”

Under Abdullah, Saudi Arabia sent billions of dollars in aid to Egypt after Sisi toppled the Muslim Brotherhood’s Mohamed Morsi in 2013, in a bid to ensure the long-term erosion of the Brotherhood’s regional influence. The Saudi royal family view the Brotherhood as a threat to their own authority in Riyadh.

Aware that Abdullah’s death may raise questions about Saudi Arabia’s continued commitment to Egypt, Sisi’s statement asserted “full confidence” that Abdullah’s successor king Salman “will continue the late king’s legacy to serve the causes of the Arab and Islamic nations”.

Muqrin’s position was confirmed last year by the 35-member allegiance council in a move designed by Abdullah to guarantee a smooth succession. But that manoeuvre apparently faced opposition from less prominent surviving sons of Ibn Saud, especially prince Ahmed. That means there could still be an argument – something the Al Saud have tried hard to avoid.

“I don’t think they are crazy enough to have an internal conflict over the throne,” said a Saudi writer. “The lesson is whatever you do, you do it in private and you don’t let rivalries upset the stability of the family’s rule,” argues a former diplomat.

Bruce Reidel, a CIA veteran and now a Brookings Institution expert, said: “If and when Muqrin ascends to the position of crown prince, the kingdom will face the unprecedented challenge of picking a next in line from the grandsons of Ibn Saud. That will raise questions of legitimacy not faced in the last century of Saudi rule.”

Predicting events inside this large and secretive clan is notoriously difficult and often described as a sort of Arabian version of Cold War-era Kremlinology. But one possibility is that younger royals will demand a greater role.

Abdullah’s sons, prince Mitab, head of the National Guard, and prince Mishaal, governor of Mecca, both mistrust crown prince Salman and his “Sudairi” wing of the family, named after one of Ibn Saud’s favourite wives. Mohammed bin Nayef, the interior minister and son of the late crown prince Nayef, is another highly regarded figure of the same generation who is also much admired in the west.

Maintaining the family consensus will get harder the closer the younger generation get to power, experts argue.

The Saudis – the king’s formal title is “guardian of the two holy places” (of Mecca and Medina) – bill themselves as the leaders of the Sunni Muslim world, a role that has taken on increased significance in the face of the jihadi threat and the atmosphere of sectarianism across the region.