Analysis: Defeat of the terror group could lead to the return of al-Qaeda in Syria and Iraq 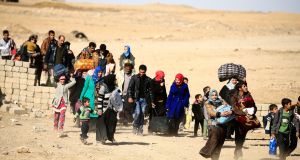 Displaced people in Mosul flee Islamic State on Tuesday. A defeat of the jihadists could trigger conflicts between the forces now attacking it. Photograph: Thaier Al-Sudani/Reuters

Offensives against Islamic State in Mosul in northern Iraq and Raqqa in north-central Syria have sown potentially explosive conflicts between forces battling the radical group.

Conflict between Iraqi Kurds and the Baghdad government is brewing. Kurdish regional president, Massoud Barzani, has repeatedly stated that his forces “will not retreat from areas retaken” from Islamic State, also known as Isis, despite an agreement with Baghdad that the Kurds would withdraw.

Kurdish peshmerga militiamen have been building earth berms and cinder block walls to stake claims to captured territory and annex it to the Kurds’ autonomous region.

After Islamic State swept from Syria into northern Iraq in June 2014, peshmerga fighters halted the jihadists near Kirkuk and took over the city. Although Kirkuk has a mixed population of Kurds, Arabs and Turkomen (ethnic Turks), the Kurds claimed it. Amnesty International has reported that peshmerga have expelled hundreds of Arabs from Kirkuk and villages near Mosul.

Rivalries between Syrian Kurds could also spark conflict. Syrian Kurds in the 3,300-strong Rogava brigade, trained by the Iraqi Kurds, have been fighting in the Mosul campaign alongside the peshmerga and Iraqi army. But this brigade is not welcome in Syria, where US-backed Syrian Democratic Forces have launched an offensive against Raqqa, Islamic State’s capital.

While the Democratic Forces contain some Arab and minority elements, most fighters belong to the Syrian Kurdish Protection Units, the military arm of the leftist Syrian Kurdish Democratic Union. The union is affiliated with the Turkish Kurdish Workers’ Party, which is fighting Ankara for self-rule.

Turkish involvement in Iraq and Syria has already lead to warfare. Fearing Syrian Kurds could reinforce the Turkish Kurds, Ankara has bombed and shelled Syrian Democratic Forces fighters. These fighters have occupied a wide belt of territory on the Syrian side of the frontier with Turkey and proclaimed “Rogava”, a Syrian Kurdish federal state modelled on the Kurdish region in Iraq.

Syrian Kurds have also, reportedly, cleansed Arabs and Turkomen from villages under their control. Proclaiming itself the Turkomen’s protector, Turkey has intervened on their behalf.

Turkey has demanded roles in the Mosul and Raqqa battles, despite opposition from Baghdad and Damascus. Turkish troops have remained at a base at Bashiqa, near Mosul, while Turkish tanks and soldiers bolstering Syrian insurgents are advancing on the strategic Syrian city of al-Bab, held by Islamic State, in preparation for the Raqqa offensive.

To avert clashes between allies in Syria, the United States has ordered Democratic Forces to pull eastwards across the Euphrates river, leaving the area west of the river to Turkey. This could enable Ankara to squeeze Syrian Kurds and erase Rogava.

The Mosul campaign could either ignite warfare between Iraqi Sunnis and Shias or prompt a mass exodus of Sunnis from the country. Baghdad’s deployment of Shia militiamen east of Mosul has exacerbated fears of mistreatment among Sunni Arabs. Shia militiamen have abused, detained and killed Sunnis displaced by warfare in Falluja, Dyala, Ramadi and elsewhere.

Shia persecution was the main reason why Sunnis initially welcomed Islamic State when it crossed the Syrian border into Iraq in 2014.

Since neither the Iraqi nor Syrian government forces are capable on their own of holding territory lost by Islamic State, vacuums left by its defeat and withdrawal could be filled by warring militias and Turkey. Unless there are firm, internationally imposed agreements involving Baghdad, Damascus, the militias and Ankara, the war against Islamic State could be transformed into equally deadly and destructive mini-wars.

Finally, if and when Islamic State is defeated, local forces and allies will have to take on al-Qaeda’s Jabhat al-Nusra, currently the most powerful jihadi group in Syria. Nusra occupies Syria’s northwestern Idlib province and pockets of territory elsewhere.

Unless eliminated in Syria, Nusra, founded in Iraq, could return to that country and take over Sunni territory from which Islamic State is driven. Territory in both Syria and Iraq would give al-Qaeda a major presence in the region.