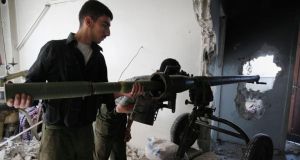 Forty people were killed and at least 120 people were wounded in an explosion at a weapons cache in the central Syrian city of Homs today, a group opposed to president Bashar al-Assad said.

The explosion occurred in the south-eastern district of Wadi al-Dhahab, which the army has taken over, the Syrian Observatory for Human Rights said.

The group has a network of sources in the opposition and state security forces. The Observatory said the casualties were soldiers and civilians and that some of the wounded were in a critical condition.

Earlier president Assad said today he was confident of victory against rebels in a 28-month-old civil war that has killed more than 100,000 people and sent nearly two million fleeing abroad.

Insurgents have seized large swathes of territory, but Dr Assad’s forces have staged a counter-offensive in recent weeks, pushing them back from around the capital Damascus and retaking several towns near the border with Lebanon.

“If we were not sure that we were going to win in Syria, we would not have the ability to resist and the ability to continue fighting for more than two years against the enemy,” state news agency SANA quoted Dr Assad as saying.

The Syrian leader has framed the revolt against four decades of his family’s rule as a foreign-backed conspiracy fought by Islamist “terrorists.”

When pro-democracy protests started in March 2011, a military crackdown eventually led to an armed insurrection.

Addressing officers on the 68th anniversary of the Syrian army’s creation, Dr Assad said soldiers had shown “courage in the face of terrorism . . . and the fiercest barbaric war in modern history”.

UN investigators say the Syrian president’s forces have carried out war crimes including unlawful killing, torture, sexual violence, indiscriminate attack and pillaging in what appears to be a state-directed policy. They say rebels have also committed war crimes, including executions, but on a lesser scale.

The struggle in Syria has become markedly sectarian, broadly pitting majority Sunni Muslim rebels and against Dr Assad’s minority Alawite sect, which is an offshoot of Shia Islam.

Dr Assad has relied on Alawite-led army units and security forces from the start, but has turned increasingly to loyalist militia armed and funded by Damascus to fight the rebels.