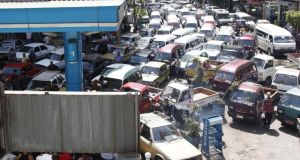 Vehicles queue at a Cairo petrol station during a fuel shortage last month. “The economic downturn has been brought home to every Egyptian household by long queues at petrol stations and bakeries, the slide in the value of the currency, and rising unemployment.” Photograph: Mohamed Abd El Ghany/Reuters

Egypt’s economic collapse over the past two years has prompted millions to return to the streets and squares to topple president Mohamed Morsi, who focused on entrenching the power of the Muslim Brotherhood instead of tackling inflation, fuel shortages, electricity cuts, unemployment and lack of public services.

During the period of Brotherhood rule, government expenditure was boosted by raising the minimum wage in the public sector and granting temporary employees tenure, swelling the already oversized bureaucracy.

The initial response of investors to Morsi’s ousting was a 7 per cent spike in trading on the country’s stock market but the turmoil that has followed has exacerbated the climate of financial and economic uncertainty. The economic downturn has been brought home to every Egyptian household by long queues at petrol stations and bakeries, the slide in the value of the currency, and rising unemployment.

Out of a labour force of 27 million, four million people (13 per cent) are said to be unemployed: 10 per cent of men, 25 per cent of women. While these statistics may not lie, they do not really reflect the situation on the ground. People are considered unemployed if they have been without work for a specific period and continue to seek employment. Those who have given up the search are not counted. This is true also for the 82 per cent of people between the ages of 15-29 who have never worked. They account for more than 20 per cent of the population. Therefore, the unemployment rate is well over 33 per cent.

Growth rate
Nothing is said about employment or unemployment among those in the informal economy.

Since the 2011 uprising, Egypt’s growth rate has slowed from 5-6 per cent to 2 per cent, hardly enough to keep up with the country’s population growth rate of 1.7 per cent, and debt has ballooned to 85 per cent of GDP. Manufacturing industries have shut down, tourism is said to have fallen by 45 per cent but this is an underestimate, and inflation has risen from 3 per cent to 13-18 per cent. Foreign and local inves- tors have converted their capital into foreign currencies, creating shortages of dollars and euro, and transferred funds abroad.

The country’s foreign exchange reserves, amounting to $35 billion in 2010, have fallen to $14.92 billion, $1.12 billion in June alone. The value of the reserves represents less than three months of imports and only about half of the sum is in cash or in securities than can be used for purchases.

The figure is misleading because $9 billion is in loans: $3 billion each from Saudi Arabia and Qatar; $2 billion from Libya, and $1 billion from Turkey. While Riyadh may be encouraged to boost its economic support now that Muslim Brotherhood rule has come to an abrupt end, Qatar, which is allied to the Brotherhood, could pull back from the transitional government at a time Egypt requires urgent help.

Political uncertainty will also discourage the International Monetary Fund from providing a loan of $4.8 billion because Cairo is in no position to meet the fund’s unpopular demands to impose taxes and end subsidies on fuel that would harm the poorest sectors of society.

On track
Other international donors have pledged $9.7 billion once the IMF loan is on track. This will not happen any time soon.

Following the Morsi ouster businessmen have established a fund to support the economy. The military, which has a vast economic empire, has donated €88 million to launch the campaign which is expected to raise €1.2 billion. However the initiative has not come under the supervision of the central bank or ministry of finance, which would have to guarantee that it will not be depleted by corruption. The “revolution” remains determined to root out corruption and the old ways of governing the country.

Mohamed El-Erian, the chief executive of global investment management firm Pimco and of Egyptian origin, wrote that traditionally elites had difficulty gaining power in Egypt, but once installed, the state apparatus and vested interests have striven to maintain themselves in power “regardless of performance”. Today, Egypt’s rulers have to “deal with citizens” who are “empowered” and feel entitled to intervene.