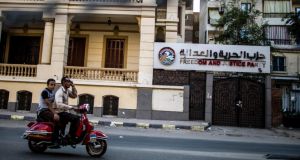 A man and his son drive past a building once used as offices for the Freedom and Justice Party that was linked to the Muslim Brotherhood in Cairo. The Egyptian police yesterday arrested Mohammed Badie, spiritual leader of the Muslim Brotherhood, hours after a court ordered the release of former President Hosni Mubarak. Photograph: Bryan Denton/The New York Times

Concern for the fate of four Irish siblings detained during unrest in Cairo has increased following reports in the Egyptian media that they are among nine foreign nationals being investigated for charges including attempted murder, possessing firearms and belonging to a militant group.

The reports claim that the nine foreigners, who also include Canadian, Turkish and Syrian nationals, deny all charges relating to the siege of Cairo’s al-Fath mosque at the weekend. While the four Irish citizens were not named by the media outlets, it is understood they are the Halawa siblings, Omaima (21), Fatima (23), Soumaya (27) and brother Ebraheem (17).

Egyptian media reported that a Cairo prosecution office yesterday ordered the nine foreigners be jailed for 15 days pending investigations into deadly violence that erupted around the mosque on Friday and continued into Saturday.

According to one report, all detainees told the prosecutor they were passing by the district and sought refuge in al-Fath mosque when the clashes broke out.

Mourning
Efforts to obtain further information may be hampered by the three days of mourning announced yesterday for 25 policemen killed on Monday by suspected Islamist militants in the Sinai region.

Sheikh Hussein Halawa, father of the siblings and imam at the Islamic Cultural Centre of Ireland, said he suspected the accusations against the foreign nationals were politically motivated, given how sensitive the interim Egyptian authorities have been to international criticism of a bloody security crackdown that has claimed the lives of more than 900 people over the past week.

“My children are innocent in all of this. They did not do anything,” he said. “This is politics, and the situation is very urgent because my children could be in great danger.”

The reports of charges emerged after a representative from the Irish embassy in Cairo was granted consular access to the Halawas yesterday afternoon.

The diplomat met the siblings at the security forces headquarters in the Tora district of Cairo. He “spoke freely to them in person for an extended period of time” and passed on personal items from their mother who is in Cairo, according to sources. The Halawa sisters appeared in good health but Ebraheem Halawa had a bandaged hand. All are Irish citizens and, according to their family in Dublin, all travelled to Egypt on Irish passports.

The siblings were on their annual family holiday when they decided to take part in protests against the military overthrow last month of Mohammed Morsi, Egypt’s first democratically elected president.

Mr Badie was charged in July with incitement to murder in connection with protests before Mr Morsi’s ousting and is due to stand trial on August 25th along with two deputies.

The US has urged Egypt not to ban the Brotherhood, an option mooted in the past week by the interim prime minister. The Obama administration said on Monday it was still reviewing whether to freeze any of its $1.55 billion annual aid, most of it military, to Egypt.

EU foreign ministers are due to meet in Brussels today to discuss how the union might apply its influence as a major trade partner to encourage compromise in deeply polarised Egypt.