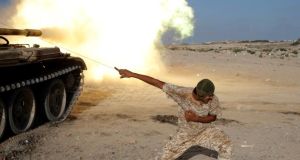 A fighter of Libyan forces allied with the UN-backed government fires a shell with Soviet made T-55 tank in Sirte, Libya. Photograph: Goran Tomasevic/Reuters

A car bomb targeting security forces on Tuesday in the eastern Libyan city of Benghazi killed at least 23 people and wounded many others, a spokesman for the forces and medical officials said.

The blast occurred in a residential area in the Guwarsha district, the scene of fighting between security forces loyal to Libya’s eastern government and an alliance of Islamists and other opponents.

The alliance, the Shura Council of Benghazi Revolutionaries, claimed responsibility for the blast, according to a statement posted on media sites linked to the group.

Earlier, Italy’s foreign minister Paolo Gentiloni said they would consider allowing the US to use its Sigonella air base in Sicily for strikes against Islamic State militants in Libya if asked.

The two Nato allies agreed in February that Italy would only allow the US conduct “defensive” strikes from there, Mr Gentiloni said.

US planes bombed Islamic State – also known as Isis – targets in Libya on Monday at the request of the UN-backed government in Tripoli. This was to help push militants from their former stronghold of Sirte. US officials said this was the start of a sustained campaign.

When asked on RAI state television whether the US would be allowed to use the air base during the campaign, Mr Gentiloni said: “Should there be requests, we will consider them.”

So far Italy has not been asked, an Italian government source said.

The government can approve use of the base in eastern Sicily without a parliamentary vote, the source added.

On Tuesday Robin Mack, a spokeswoman for US Africa Command, declined to give details about the US strikes or where they originated.

Sigonella is home to a US naval air station as well as a base for the Italian air force. It is sometimes used for logistical support for US and other Nato forces.

“It’s a very positive fact that the Americans decided to intervene in Libya,” Mr Gentiloni said on RAI TV.

“Ninety percent of the migrants that arrive in Italy come from Libya, and that is why we are so interested in the stabilisation of the country, beyond the terrorist threat.”

Italy is directly across the Mediterranean from Libya.

Mr Obama said the air attacks were undertaken to make sure that Libyan forces were able to finish the job of fighting Islamic State and increase stability there.

The absence of stability in Iraq and Syria “has helped to fuel some of the challenges that we’ve seen in terms of the migration crisis in Europe”, Mr Obama added.

Fighters from a range of anti-Islamic State brigades are dug in behind sand banks and concrete walls in the coastal city after suffering high casualties in months of street-by-street fighting.

“If the United States is serious about these air strikes we are very pleased, and it will help us on the ground,” said Husam Bakoush, a fighter with the Marsa brigade.

The battle highlights the challenges of driving Islamic State from Libya, where it has struggled to win local support. The country is still deeply divided, and a UN-backed government had hesitated to call for US support until now for fear of a backlash.

For the fighters on the ground this was a source of frustration.

“Most of my friends are happy, but they asked why it did not happen sooner,” Bakoush said.

Abdalla Ali Ibrahim Ismail, another fighter with Marsa brigade, said the strikes could be a game-changer.

“I think the US strikes will help the ground troops a lot. I hope that when we start to push again against Islamic State positions the US planes will give us cover. Morale is much higher, our men were celebrating last night.”

The air strikes in Libya were “open-ended”, but each one would be co-ordinated with the UN-backed government of national accord, US officials said.

Islamic State took over Sirte a year ago, but forces from the western city of Misrata allied to the UN-backed government began a campaign to liberate it in May. – Reuters