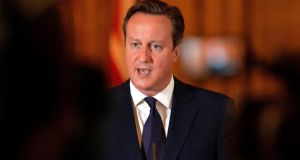 The United Kingdom must play its part to confront “the menace” of the Islamic State terrorist group, British prime minister David Cameron has said.

His declaration yesterday came following the beheading of Scottish aid worker David Haines and a threat to kill Manchester taxi driver Alan Henning, who was kidnapped while delivering aid to refugees in Syria.

The UK “cannot ignore” the threat posed by the Islamic State group, he said.

“There is no option of keeping our heads down that would make us safe. The problem would merely get worse. We cannot just walk on by if we are to keep this country safe; we have to confront this menace,” said Mr Cameron. However, he ruled out immediate military action.

Australia’s prime minister Tony Abbott has announced that 600 troops, plus naval ships and six fighter-bombers, are being sent to the United Arab Emirates.

Mr Cameron is wary of moving too quickly, lest he suffer another House of Commons defeat as he did last year over the possibility of the use of military force against the Syrian regime.

However, it is clear that a coalition – advocated by US secretary of state John Kerry – is gradually forming, including Middle Eastern states.

Saudi Arabia and the United Arab Emirates have offered to attack Isis, according to western diplomats. But Mr Kerry is “extremely concerned” by the progress that has been made.

The involvement of Arab states would help protect the west from charges of a crusade, but much depends on the ability of the new Iraqi government to tackle the Islamic State.