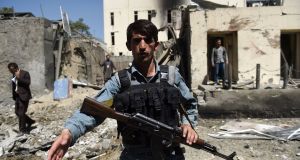 Militants have stormed a building housing an international aid organisation in Kabul, provoking an overnight firefight with security forces in which three gunmen were killed and six civilians were wounded, Afghan officials said.

The attack took place a day after twin bombings near the Afghan defence ministry killed at least 35 people and wounded more than 100 others.

Police special forces killed all three gunmen involved in an overnight attack in the Shar-e Naw district of the Afghan capital, Sediq Sediqqi, a spokesman for the Afghan interior minister said.

Six civilians were wounded in the attack, according to the interior ministry. It initially said one civilian had been killed but a later statement clarified that only three militants had died.

An interior ministry statement said that a suicide car bombing struck close to a building belonging to the charity Care International in Shar-e Naw late on Monday night, after which three more attackers entered the building.

“Police special forces immediately reached the site of the attack and started rescuing people from the building . . . 42 people who were trapped were evacuated by the security forces,” the statement said.

In a statement on Tuesday, Care said that on Monday night “an armed group launched an attack on what is believed to have been an Afghan government compound located close to the Kabul office of Care International”.

It said the incident continued through to the early morning, “with damages sustained to the Care compound”.

“All Care staff have been evacuated, are safe and are accounted for,” it confirmed.

The area is home to several guest houses and many foreigners and diplomats reside there. Security forces have blocked all the roads leading to Shar-e Naw.

The shooting comes after at least 35 people were killed on Monday in twin bombings near the Afghan defence ministry that were later claimed by the Taliban.

The ministry said in a statement Tuesday that 100 people were wounded in the bombings, and that five army officers were among the 35 killed. The death toll had risen considerably overnight.