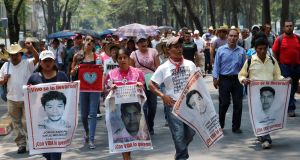 Relatives hold posters reading “They took them alive, alive we want them”, with images of some of the 43 missing students of Ayotzinapa College Raul Isidro Burgos as they take part in a protest along the streets to mark the 20-month anniversary of their disappearance, in Mexico City. Photograph: Henry Romero/Reuters

Mexico has been warned that senior politicians and army leaders could face trial at the International Criminal Court (ICC) for mass disappearances and extra-judicial killings during its battle against drugs cartels over the past decade unless its government takes punitive action at home.

A new report by the Open Society Justice Initiative and five Mexican human rights organisations claims there are “reasonable grounds” for believing both sides have committed crimes against humanity during the drugs war in which more than 150,000 have been killed since 2006.

It accuses the governments of current president, Enrique Peña Nieto, and his predecessor between 2006 and 2012, Felipe Calderon, of “almost completely failing” to ensure accountability for the worst of the atrocities “due primarily to political obstruction”.

And it alleges: “Senior officials have consistently denied and minimised the scale and nature of the killing, torture and disappearances, and have made sweeping and unfounded assertions that victims of these crimes are themselves criminals.”

Described by the US government as “the most technologically advanced, sophisticated, vicious, ruthlessly violent and dangerous cartel operating in Mexico”, the Zetas have moved beyond drugs into arms and people-trafficking – and have been behind kidnappings and beheadings.

However, based on interviews and evidence collected between 2006 and 2015, the Open Society report, Undeniable Atrocities: Confronting Crimes against Humanity in Mexico, also warns the government that “resort to criminal action in the fight against crime continues to be a contradiction – and one that tragically undermines the rule of law”.

Its 232 pages include evidence of mass graves and thousands of “disappearances”, as well as details of incidents such as the shooting dead by the army of 22 suspected gang members in Tlatlaya in June 2014 and the kidnapping and presumed killing of 43 students at a teacher-training college in Ayotzinapa.

The authors recommend that Mexico should allow an independent commission to investigate alleged abuses by both sides, and that it should have the power to bring charges against those responsible in Mexico’s domestic courts.

It would be modelled on the UN Commission against Impunity in Guatemala, which gathered evidence of corruption against President Otto Perez Molina leading to his resignation and arrest in September 2015.