How the Bolsonaro government is waging war on Brazil’s poor 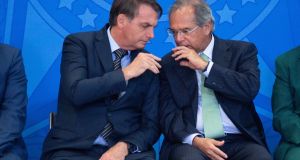 Celebrating the recent plunge of the Brazilian real against the US dollar, Brazil’s finance minister Paulo Guedes said at least it meant domestic maids would no longer be able to afford to visit Disney.

The comments provoked outrage and the minister, recently returned from a holiday in Florida himself, quickly apologised. He had only tried to highlight the cost to the economy of the previously cheap dollar, which made Brazil’s manufacturing exports uncompetitive but permitted “a hell of a party” with – he claimed – poor people visiting Walt Disney three times a year.

But the manner in which the economics tsar of far-right president Jair Bolsonaro expressed himself revealed a flash of the class prejudice that is all too common among Brazil’s elite.

Guedes, a multimillionaire financier before joining government, seems to have a problem with Brazil’s least well-off. He previously identified the cause of poverty as the poor’s inability to save. In Davos this year he blamed them for the deforestation of the Amazon jungle.

“They destroy because they are hungry,” he said, diverting attention from the long established fact that well-financed logging and ranching interests are behind the worst environmental crimes in the world’s biggest rainforest.

This antipathy towards the poor might explain the Bolsonaro administration’s decision to include the country’s least well off in the fiscal adjustment currently being undertaken by Guedes.

That such an adjustment was needed is little debated. A glance at the country’s rapidly worsening debt profile confirmed as much. It started after the 2014 presidential election under left-wing president Dilma Rousseff and continued after her impeachment by Michel Temer.

Now it is being overseen by a team headed by Guedes and increasingly one of the most visibly affected sectors of society are those in extreme poverty. That is because the much-lauded social assistance programme called Bolsa Família, (the family purse), which gives a small monthly payment averaging €38 to the poorest families if their children attend school, is now under financial assault.

The Bolsa has been under pressure ever since Rousseff suspended its annual increase at a time when inflation was running at about 10 per cent. That erosion in value continued under Temer but his administration did manage to clear the waiting list of people seeking admission.

But this has exploded since Bolsonaro came to office and Guedes’s team went to work. At least one million families, or 3½ million people, have been waiting for more than 45 days for admission. Many of these are families that survive on €20 or less a month.

Now funding for the Bolsa is being cut. Its budget for 2020 will be lower than last year despite the problems already in the system.

The decision to include Brazil’s poorest in the fiscal adjustment is unnecessary. The programme is extraordinarily cheap considering its social impact, costing just 0.4 per cent of GDP to attend to more than 13 million families.

It is also counter-productive. The Bolsa is a key tool in tackling Brazil’s huge inequality gap which has been increasing again since 2014. The spending on it also has a higher multiplier effect on the wider economy than other federal spending as recipients tend to spend all they get, unlike federal employees or pensioners.

There is also far more wasteful spending elsewhere by the federal government that could have been tackled instead. Guedes knows well the sort of fat that pads out the federal budget. As well as his monthly salary of €6,275, he receives another €1,650 (or 43 average Bolsa payments) a month in extra benefits to cover his living expenses in Brasília and flights back to his home in Rio.

Such payments are not even a ministerial perk but lavished right across the upper echelons of the federal sector and then mimicked at the state and municipal levels and in the judiciary.

The minister’s team says he is legally entitled to his extras even as already financially strained municipalities in Brazil’s poorest regions say they are under increasing pressure from desperate families seeking food parcels.

Any fiscal adjustment imposes choices on an administration. In Brazil those currently being undertaken by Bolsonaro’s team reveal an indifferent cruelty towards the country’s most vulnerable citizens.