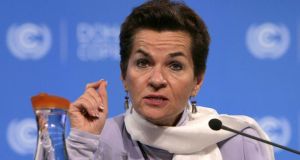 United Nations Convention on Climate Change executive secretary Christiana Figueres said she was encouraged by the progress made over the past two weeks. Photograph: Karim Jaafar/AFP/Getty Images

The world is still on course for an international agreement to tackle global warming in 2015 despite days of bickering in Bonn over how decisions are made under the UN Framework Convention on Climate Change (UNFCCC).

Russia – supported by Belarus and Ukraine – collapsed one of the key strands of the UN talks here this week after repeatedly complaining about how its objections to a deal renewing the Kyoto Protocol were ignored at last December’s climate summit in Doha.

But UNFCCC executive secretary Christiana Figueres was “encouraged by the progress” made over the past two weeks, and said it laid the groundwork for this year’s Warsaw climate summit in November and, ultimately, an agreement in 2015.

Ireland’s David Walsh, speaking on behalf of the EU presidency, agreed progress had been made, “notwithstanding the deadlock” in the convention’s Subsidiary Body for Implementation (SBI), but a “lot more work” was still needed to make Warsaw a success.

Asked was it not ironic that Warsaw would be the venue, given that Poland’s coal-fired power stations are the most polluting in Europe and 12 more are being planned, Mr Walsh said the Polish government’s willingness to lead the UN process was a “positive signal”.

The round of talks in Bonn took place against the backdrop of yet more “extreme weather events”, including the severe floods in central Europe that led to 40,000 people in Germany being evacuated after both the Elbe and Danube rivers burst their banks.

Ambitious
A fever-stricken Ms Figueres told the final UNFCCC press conference she was particularly encouraged that governments represented in Bonn were increasingly focusing on the need to become more ambitious for the 2015 global climate change agreement.

“This has been an important meeting because governments are moving faster now from the stage of exploring options to designing and implementing solutions on how to transform the world’s energy systems quickly towards a low-carbon future.

“The record greenhouse gas concentrations we now see in the atmosphere are due to past investment patterns and the policies and profit motives behind them. To prevent our atmosphere turning permanently against us requires a continued, faster shift.”

Given that the 2015 global agreement would not come into force until 2020, Ms Figueres stressed the importance of governments taking action between now and then to reduce emissions – along the lines proposed this week by the International Energy Agency.

The Climate Action Network called on governments to agree in Warsaw on a 2014 deadline for releasing new pledges to cut emissions so as to avoid “the kind of last-minute scramble that made the 2009 Copenhagen summit such a disaster.”

Oxfam climate change policy adviser Jan Kowalzig said the Bonn talks “have not given us confidence that emissions will reduce and that developing countries will be properly supported to adapt to a changing climate” – with billions of dollars in “climate finance”.

Food security
Substantial progress was made on agriculture by the UNFCCC’s Subsidiary Body for Scientific and Technical Advice (SBSTA) after years of stalled negotiations – mainly due to developing countries’ concerns about negative effects on food security.

Ireland’s EU presidency was at the forefront of efforts to advance progress in this area, with a decision to start technical work in Warsaw, while acknowledging the need to safeguard food security, “through efficient, sustainable production adapted to climate change”.

Jürgen Lefevere, climate strategy adviser at the European Commission, said the issue about UNFCCC decision-making raised by Russia “has to be discussed” and he pledged that the EU would work with other parties to “ensure no agenda dispute in Warsaw”.

He said the Warsaw summit “must provide clear direction” for the 2015 deal. It will be followed by a a major session of climate talks in Caracas, Venezuela, in mid-2014 and a full Conference of the Parties (COP) in Lima, Peru, towards the end of next year.