French move on from EU founders to Eurosceptics

Misunderstanding about nature of Europe at heart of French disaffection 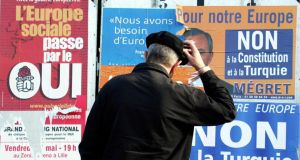 A poll published this month showed French support for EU membership has dropped 16 percentage points in a decade, from 67 per cent in 2004 to 51 per cent at present. Photograph: Pascal Rossignol/Reuters

Disillusionment with Europe has grown across the EU but the phenomenon is particularly marked in France, which prides itself on being the cradle of the fathers of Europe.

A CSA/BFMTV poll published this month showed French support for membership of the EU has dropped 16 percentage points in a decade, from 67 per cent in 2004 to 51 per cent at present. Only 2 per cent of respondents said they were “enthusiastic” about the future of the EU, while 38 per cent said EU membership was “a bad thing”.

Polls indicate the europhobic National Front and Front de Gauche may win nearly a third of the French vote in European parliamentary elections on May 25th.

Ambivalent attitude
Perhaps the French were never head over heels in love with Europe. “From the beginning, the French had an ambivalent attitude,” says Thierry Chopin, director of studies at the Robert Schuman Foundation. “France has been both an an engine of European integration and a brake on it.”

The May 9th, 1950, declaration establishing the European Coal and Steel Community – celebrated as the birthday of Europe – was made by the French foreign minister Robert Schuman, based on the vision of Frenchman Jean Monnet. French leaders were at the origin of the Single European Act (1987), Maastricht Treaty (1992) and failed European constitution.

France has also given Europe some of its greatest setbacks, including the abandonment of the European Defence Community (1954) and the “empty chair crisis” created by Charles de Gaulle over agricultural policy (1965).

A bigger turning point came in 2005. The EU gave Denmark and Ireland opt-outs and clarifications in exchange for revisiting their treaty rejections. That wasn’t possible in the face of the myriad French objections to the constitution.

President Nicolas Sarkozy circumvented popular opinion by having parliament ratify the Lisbon Treaty. Numerous French people have told me they turned against Europe when the French government “trampled on universal suffrage” by disregarding the 2005 vote.

“No one in France addressed the failure of the constitutional treaty,” says pro-European MEP Sylvie Goulard. “They shoved it in the fridge and held a foot on the door. It was very unhealthy; like a family secret. They tried to repress it psychologically. But when you repress things they always come back to the surface.”

“The economic crisis of 2007 accentuated the feeling that Europe not only no longer makes people dream but that Europe may be the heart of the problem,” says Cautrès. The council and commission accelerated economic integration, almost surreptitiously. German finance minister Wolfgang Schäuble has said the steps taken to save the euro were at the very limit of what the treaties allowed.

“A lot of decisions that touch on extremely sensitive issues, such as national budgets, were taken during the crisis,” says Chopin. “The economic questions were addressed; the political questions were not. That created distrust . . . If we move forward on budgetary union, we must also advance on political union.”

Unmanageable
France continues to harbour serious misgivings about the 2004 and 2007 enlargements to central and eastern Europe. Former president Valéry Giscard d’Estaing, who oversaw the drafting of the failed constitution, told friends he will not vote on May 25th because a Europe of 28 nations is meaningless and unmanageable.

Concrete issues crop up when one questions ordinary French people about Europe. “Brussels needs to stop messing with what’s in our plates,” says a public relations executive. “In France, food is sacred.”

“There are 28 commissioners and they all have to jesuitically their existence, so they make endless rules and directives,” says former foreign minister Hubert Védrine.

“They must stop annoying people in their daily lives.”

A great deal of responsibility lies with the French government, which unfairly blames the commission and European Central Bank for its economic problems, and uses European institutions as a dumping ground for failed politicians.

After presiding over the decline of the French socialist party, Harlem Désir was just appointed secretary of state for European affairs. As an MEP, Désir ranked 740th of 766 in terms of attendance.

“They’ve changed European affairs ministers every year for a decade. It shows how much our political class care about Europe.”

Economic barriers
A misunderstanding about the nature of Europe may be the most profound cause of French disaffection. “Since the beginning, liberalisation and the lifting of economic barriers has been the heart of European integration,” says Cautrès.

Not only do the French have a tormented relationship with the markets, competition and globalisation embodied by the EU, they deluded themselves in believing that Europe would be France writ large, that they could graft France’s social model of high taxation and cradle to the grave protection onto the EU.

The French now realise economic integration spells the end of their social model. Seventy per cent of respondents in the CSA/BFMTV poll said European construction meant higher unemployment; 63 per cent that it lessened social protection.

But old dreams die hard. If the Party of European Socialists wins the elections, the French government promises, German socialist Martin Schulz will become president of the commission and usher in a “social Europe”.

nLara Marlowe will deliver a keynote address on France and Europe to the annual conference of the Association of Franco-Irish Studies in Dublin on Friday, May 23rd. Complete programme at