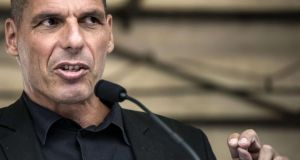 Yanis Varoufakis will not take part in “sad” elections expected next month in Greece and will instead focus on setting up a new movement to “restore democracy” across Europe, the former Greek finance minister told Reuters on Thursday.

The combative, motorbike-riding academic was sacked as finance minister last month after alienating euro zone counterparts with his lecturing style and divisive words, hampering Greece’s efforts to secure a bailout from partners.

The one-time political rock star has since steadily attacked the bailout programme that prime minister Alexis Tsipras subsequently signed up to and the austerity policies that go with it, rebelling against his former boss in parliament.

“I’m not going to take part in these sad elections,” Mr Varoufakis told Reuters by telephone when asked about the vote likely to be held on September 20th.

Mr Tsipras’s Syriza party, which hopes to return to power with a strengthened mandate, says it will not allow Mr Varoufakis and others who voted against the bailout to run for parliament under the Syriza ticket anyway.

“Not only him but other lawmakers who did not back the bailout will not be part of the ticket,” a party official said.

Mr Tsipras has poured scorn on Mr Varoufakis, telling Alpha TV on Wednesday that he had realised in June that “Varoufakis was talking but nobody paid any attention to him” at the height of Greece’s negotiations with IMF and European Union lenders.

“They had switched off, they didn’t listen to what he was saying,” Mr Tsipras said. “He didn’t say anything bad but he had lost his credibility among his interlocutors.”

Mr Varoufakis, in turn, likened Mr Tsipras to the mythical Sisyphus condemned to push a rock uphill only to have it roll back down, telling Australia’s ABC Radio the prime minister had embarked on “pushing the same rock of austerity up the hill” against the laws of economics and ethical principles.

The 54-year-old Mr Varoufakis has already dismissed speculation that he would join the far-left Popular Unity party that broke away from Syriza last week, telling ABC that he had “great sympathy” but fundamental differences with them and considered their stance “isolationist”.

Instead, he told Reuters he wanted to set up a European network aimed at restoring democracy that could eventually become a party, but at the moment was just an idea that he had seen a lot of support for.