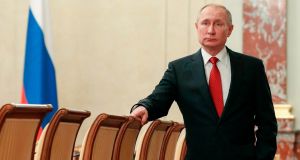 Russian president Vladimir Putin: Analysts say he wants to secure a political future for himself and Russia when he is constitutionally mandated to step down in 2024. Photograph: Dmitry Astakhov/Sputnik/ Government pool via AP 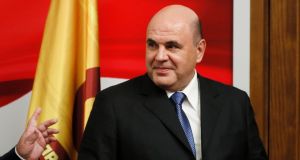 Vladimir Putin has announced the most sweeping political changes in Russia in almost three decades. The constitution will change in a way that could see him extend his 20-year reign after his term expires in 2024, while long-time ally Dmitry Medvedev has resigned as prime minister.

What are these changes?

Mr Putin plans to hold a constitutional referendum to redistribute some powers from Russia’s presidency:

* Parliament will gain greater powers over the cabinet, judges, and the security services.

* Future presidents will be limited to two total terms in office. They will be required to have lived in Russia for the past 25 years and never to have held a foreign passport or residence permit

* The State Council, an advisory body, will gain expanded powers

Analysts had expected the Kremlin to push for constitutional reform since Vladislav Volodin, speaker of the lower house of parliament, first mentioned it last autumn. Putin floated the idea in December.

The rollout was highly choreographed: Putin did not mention the changes until nearly an hour into his speech on Wednesday, while top officials immediately took to television to praise them. But the timing four years before Putin’s term expires still came as a surprise.

Why is Putin making them?

Analysts say Putin (67) wants to secure a political future for himself and Russia when he is constitutionally mandated to step down in 2024.

“This is the official start of the transition of power,” Alexander Baunov, an analyst at the Carnegie Moscow Center, wrote on Twitter. “There can be no second Putin. Putin’s four terms were needed to help the country recover from the collapse of the Soviet Union. From now on, the maximum reign will be 12 years.”

Speculation over Putin’s future has convulsed the Kremlin ever since he won re-election to a fourth and final term in 2018. His approval ratings sunk to record lows last year amid a moribund economy; attempts to revive it through a Rbs25.7tn (€490 billion) spending programme have so far sputtered.

The uncertainty has also set off battles among his underlings as they jockey for position, suggesting that Putin may have wanted to pre-empt further clashes. “There are lots of obvious signs that internal infighting is getting fairly severe,” said Ekaterina Schulmann, a political scientist.

“Interest groups are fighting to the death, the level of repression is high, and people are putting each other in jail for long terms. This could transform into a coalition that might be hostile to him, or the mere uncertainty could contribute to instability if it’s allowed to go on for too long.”

Will Putin cede power when his term expires?

“He thinks things will collapse without him,” one of the people said. “There won’t be serious change in the country without pressure. The majority of people don’t care. Revolutions take place when there is no bread and the shelves are empty.”

While Putin could theoretically become prime minister again, analysts say the most likely move will see him head up the revamped State Council. If he did so, Putin would be taking after Kazakhstan’s Nursultan Nazarbayev, who stepped down last year after almost three decades in power to become “leader of the nation” for life and appointed a successor.

“He wants Russia to have a strong president and will choose a successor who is loyal, patriotic, and will support the transition,” said Tatiana Stanovaya, founder of Russian political analysis firm R. Politik. “Putin will stay within the system to determine some strategic questions and has the right of veto in case he has any disagreements with the successor.”

Why did Medvedev resign as prime minister?

Medvedev is arguably Putin’s closest political ally. A colleague since their days in the Leningrad mayor’s office in the 1990s, Medvedev spent four years as president from 2008 to 2012 before swapping jobs with Putin in a pre-determined “castling”. Upon returning to the Kremlin amid mass street protests, Putin undid most of Medvedev’s liberal, pro-western legacy and ramped up Russia’s confrontational stance against the West.

Though Medvedev clearly continued to enjoy Putin’s trust, his demotion hamstrung him politically and made him a rumoured candidate for the chopping block.

“Everyone has been sick of Medvedev for ages,” Stanovaya said. “He should have resigned after the [2018] presidential elections, but Putin needed to resolve who his replacement would be and where he would put Medvedev. Now Putin has decided what to do with his future and they are going their separate ways.”

Medvedev’s new job, however, suggests he still has some distance left to run. Putin created a position for him as deputy head of the security council and said Medvedev’s presidential experience made him uniquely qualified to handle the brief.

Who will succeed Putin?

Medvedev’s replacement is Mikhail Mishustin, a technocrat who has won plaudits for modernising Russia’s tax office. “[Mishustin’s appointment] is a surprise and I think business will welcome it,” said the chief executive of one of Russia’s biggest companies. “The man is by far the most qualified and smart in the current landscape.”

But Mishustin’s complete lack of political experience means he is unlikely to be groomed as Putin’s successor, Schulmann said. “There are some people that, if he appointed them, it would be a political message and everyone would understand what was happening. Mishustin isn’t that. It’s not a political declaration.”

Putin has yet to indicate whether he will cede power at all and has earmarked no clear successor. Apart from Medvedev, dozens of names have been floated including Moscow mayor Sergei Sobyanin, defence minister Sergei Shoigu, deputy prime minister Dmitry Kozak, as well as Alexei Dyumin, Putin’s former bodyguard, and his children Maria and Ekaterina, who have recently made several appearances on state TV under pseudonyms.

“Putin won’t create a figure who could start competing with him,” Gleb Pavlovsky, a former Kremlin spin-doctor, said. “He did that with Medvedev and it didn’t work.”

As long as Putin is calling the shots, the changes can be only superficial, he added. “Everything is run through calls from the presidential administration. If they don’t get rid of that then you can rewrite the constitution as much as you want - everything will still stay the same.” – Copyright The Financial Times Limited 2020