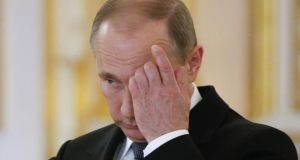 Russia’s president Vladimir PutinMr Putin, who has repeatedly denied any involvement of Russian troops in a pro-Russian separatist rebellion there, amended a decree that had previously classified only deaths during wartime as secret. Photograph: Sergei Karpukhin/Getty Images

President Vladimir Putin ordered on Thursday that deaths of Russian soldiers during special operations in peacetime should be classified as a state secret, as Moscow stands accused of sending troops to eastern Ukraine.

Mr Putin, who has repeatedly denied any involvement of Russian troops in a pro-Russian separatist rebellion there, amended a decree that had previously classified only deaths during wartime as secret.

His spokesman, Dmitry Peskov, denied any link to Ukraine.

US state department spokesman Jeff Rathke said the law was a blow to free press and transparency. “We see this as a misplaced effort to cover up what everyone knows, and that is that Russian active duty military personnel are fighting and dying in eastern Ukraine and that the Russian government is denying it,” he said.

Russia’s role in the turmoil in east Ukraine, where more than 6,100 people have been killed in over a year of fighting, has been one of the most contentious issues in a conflict that has thrown ties between Moscow and the West into disarray.

Russian opposition activists released a report this month saying at least 220 serving Russian soldiers were killed in fighting in two places in east Ukraine last summer and earlier this year.

The presidential decree refers to information held by the defence ministry, but could, he said, find broader application. “This . . . should be seen as a threat to activists, politicians and journalists who deal with this.”

Sergei Krivenko, who heads a soldiers’ rights group and sits on the Kremlin’s advisory council on human rights, termed the presidential decree “within the logic of the current situation in Russia”. “If Russian authorities officially say there are no Russian troops in Ukraine, then, all the more so, there can be no losses,” he said.– (Reuters)