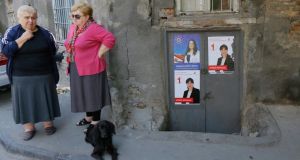 Georgia’s two main parties claim they are poised for victory in parliamentary elections on Saturday, amid tension stoked by car and gun attacks on politicians and a pledge by former president Mikheil Saakashvili to return from exile.

In the last week, two men were shot during an opposition candidate’s campaign rally, and UNM deputy Givi Targamadze escaped injury but five passers-by were hurt when a bomb blew up his car in the heart of the capital, Tbilisi.

Voters go to the polls knowing that more violence could harm Georgia’s bid to secure visa-free travel to the European Union, hamper deeper integration with the bloc and with Nato, and bolster the influence of neighbouring Russia – which supports and has stationed troops in two regions of the country run by separatist rebels.

Georgian Dream took power in 2012 just months after it was created by the country’s richest man, Bidzina Ivanishvili, who backed and helped fund Mr Saakashvili’s reforms before accusing him of authoritarianism.

After UNM was ousted, several of Mr Saakashvili’s former officials were jailed and he was charged with abuse of power, prompting him to leave Georgia; he is now governor of Ukraine’s Odessa region, across the Black Sea from his homeland.

Mr Ivanishvili served as prime minister for a year before announcing his departure from politics, but he is still seen almost universally in Georgia as its ultimate ruler, and even Georgian Dream deputies admit that he is consulted on key government issues.

The billionaire has been campaigning hard for Georgian Dream – including during twice weekly meetings with journalists on a television channel owned by his son – and predicts the party will take more than 100 of the 150 seats in parliament.

Georgian Dream claims to have strengthened human rights, democracy, the rule of law and social protection in the country of 3.7 million people.

“These elections will mark a truly important step towards the future of a democratic Georgia,” prime minister Giorgi Kvirikashvili said on Friday

“First of all, I want to call on all the voters to go to the polling stations and vote for Georgia’s better future and for Georgia’s European future,” he said, adding that he was “confident that the population values the very important steps that have been taken in the recent years in the process of building a democratic state.”

The UNM says it is confident of beating a ruling party that it accuses of choking the economy with red tape, failing to fulfil spending pledges, and making a mockery of democracy by allowing Mr Ivanishvili to run the country from the shadows.

Mr Ivanishvili “is the ‘informal leader’ of the country,” he added.

“This means he directly interferes in and can control the government, and can choose or fire the prime minister. That’s not something that should be acceptable in a democratic country.”

At the UNM’s final campaign rally in Tbilisi, Mr Saakashvili spoke to a crowd of several thousand people via a video link from the Black Sea port of Odessa. “We are three days away from the victory – see you in victorious Georgia,” Mr Saakashvili declared.

Georgian Dream officials say Mr Saakashvili will be arrested if he returns to his homeland.