Vatican report pays tribute to work of ‘feminist’ US nuns 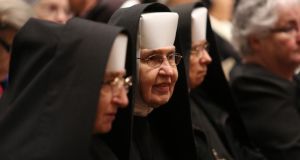 A Vatican investigation of American nuns has ended in Rome with the release of an appreciative report that acknowledged the achievements and the challenges the nuns face given their dwindling ranks. Photograph: Antonio Perez/Pool via The New York Times

The Vatican has finally released a much-anticipated report “on the life of religious women in the United States”.

Those who thought that the US nuns were in for a belt from the papal halberd were disappointed as the Vatican’s Congregation for the Institutes of Consecrated Life delivered a glowing report that paid tribute to those “women religious who have courageously been in the forefront of the church’s evangelising mission”, underlining their “concern for the poor and for social justice”.

In 2008, when the then head of Consecrated Life, Cardinal Franz Rode of Slovenia, ordered an apostolic visitation to US Institutes of Women Religious, many felt the visitation might result in disciplinary sanctions against a section of the church that sometimes seemed to follow its own radical path.

That impression was confirmed in 2009 when Cardinal Rode said he had decided to launch the visitation after hearing “critical voices from the United States”, adding: “Above all, you could speak of a certain secularist mentality that has spread among these religious families, perhaps even a certain ‘feminist’ spirit.”

You could have been forgiven if you had concluded that a severe Vatican reprimand was on the way. However, those were the days before Pope Francis. With a very different wind now blowing through the pontifical palace and with a different cardinal, Brazilian Joao Braz de Aviz, at Consecrated Life, this “final report” provided not a whiff of controversy, something underlined by Holy See spokesman Fr Tom Rosica.

Rather than conclude that this had been an arduous task leading to disappointing discoveries, Sr Millea said the port “represents a wonderful message of hope”.

Sr Holland, who is president of the US Leadership Conference of Religious Women, said it was “an affirmative and realistic” report, while Sr Donovan, co-ordinator of the Council of Major Superiors of Women Religious, said the visitation had proved to be an “overwhelming” experience in which the universal church had come to visit the sisters and not vice versa.

The final report itself concludes on a very upbeat note. “This congregation is committed to collaborate in the realisation of Pope Francis’s resolve that ‘the feminine genius’ find expression in the various settings where important decisions are made, both in the church and in social structures . . .”

When one reporter asked about the limited role of women in the Catholic Church – such as the ban on women priests – even that potentially uncomfortable consideration could not spoil the party.

“Regarding the role of women in the church, it wouldn’t be the place of this particular document to decide something or legislate for something but the Holy Father has called for a more incisive female presence in the church,” Sr Holland replied.

Summing up the whole visitation process, Cardinal Aviz said his department travelled a lot “not to find problems or to sit in judgment on certain situations but rather to listen to problems and difficulties”.

In that context, he said his congregation had also travelled to Dublin at the height of the Irish clerical sex abuse crisis, “not to criticise but rather to be with them [our fellow priests]”. The response had been one of “gratitude”, he added.

1 At least eight shot dead in German town of Hanau
2 A Russian cruiser with ‘cannibal rats’: What other ‘ghost ships’ could be out there?
3 Person claiming to represent ‘ghost ship’ owner comes forward
4 DUP pleads with UK to reduce salary threshold for migrant workers coming to North
5 ‘If all the immigrants go back, who will work in the meat factories and do the crap jobs?’
Real news has value SUBSCRIBE