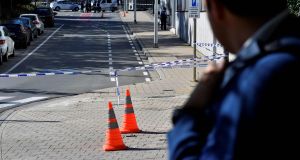 A security perimeter has been set around the scene where two police officers were stabbed on Wednesday in the Schaerbeek neighbourhood in Brussels. Photograph: Dirk Waem/Getty Images

Brussels was on high alert on Wednesday after two policemen were attacked by a man in the north of the Belgian capital and a number of locations across the city were evacuated due to possible bomb threats.

Police said they were investigating a “possible terrorist attack” after a 43-year-old Belgian national stabbed two policeman in the Schaerbeek area of the city. The man, who was identified by Belgian police as Hicham D, was arrested at the scene after he was shot in the leg by a third police officer.

On Wednesday evening Charleroi airport, about 50km south of Brussels, was evacuated, as was the main train station in Charleroi, on the back of two unspecified bomb threats.

Ryanair operates a number of flights to and from Charleroi airport, which is a popular low-cost airline hub.

Earlier, Brussels North station, one of the capital’s main train hubs, was evacuated after a false bomb alert, leading to major travel delays across the rail network. The station was evacuated just after 2pm local time, with the alert lifted shortly after 2.30pm.

Police said the two policemen who were stabbed by the assailant were not in a serious condition. Local media reported that one of the victims had been stabbed in the neck with a knife, the other in the stomach.

There were unconfirmed reports that the assailant may have been a former soldier.

Federal prosecutors said in a statement that they had searched one house in Brussels, but had not found any firearms or explosives. But they confirmed that they were investigating the possibility of a terrorist attack.

“The provisional results of the investigation indicate that it could be a potential terrorist attack,” they said on Wednesday afternoon.

The alert level in the capital remains at level 3 of a four-point scale since the March attacks. There has been a visible presence of armed soldiers patrolling train stations and streets around Brussels city centre in the last few days.

Belgium’s police and security services were strongly criticised in the wake of the terrorist attacks following revelations that some of the assailants were known to police. Several of the attackers involved in the Paris terrorist attacks of November last year, including Abdelhamid Abouud the mastermind of the attack, lived in Brussels.

Salah Abdeslam, one of the only surviving suspects in the Paris attacks, was arrested in Brussels on March 17th this year after an international manhunt and has since been extradited to France where he awaits trial.