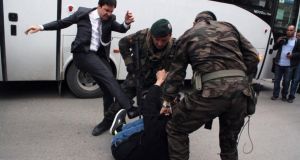 The Turkish prime ministerial aide photographed last week kicking a protester at the site of the country’s worst mine disaster is on sick leave after being diagnosed with soft tissue trauma in his right leg – the same one he used to lay in to the demonstrator.

The photograph shows Yusuf Yerkel, an aide to Recep Tayyip Erdogan, clad in a suit and tie and furiously kicking a man held down by special police forces during anti-government protests in Soma last Wednesday. It went viral on social media.

Mr Yerkel has reportedly been granted sick leave for a week. A medical report issued at an Ankara hospital testifies to “sensitivity with leg and arm movements and difficulty with walking”, according to Hurriyet. Mr Yerkel reportedly told doctors that he had fallen.

Mr Yerkel refused to apologise to the protester immediately after the incident, arguing that he had been insulted and provoked into attacking the man, who is said to be a miner from the stricken town.

After the photograph went viral on social media and received widespread coverage in the foreign and Turkish opposition press, Mr Yerkel issued what appeared to be a reluctant apology: “I have been deeply saddened by the incident that occurred in Soma on 14 May. I am sorry for being unable to keep calm despite all of the provocations, insults and attacks I faced on that day,” he said, according to the semi-official Anadolu news agency.

Mr Erdogan’s office issued an initial statement saying the incident was a personal issue for Mr Yerkel, but officials later defended him, saying the protesters had attacked him and that he acted in self-defence.

Mr Erdogan’s main political adviser, YalCin Akdogan, wrote in his newspaper column: “Yusuf Yerkel’s self-defence against those who kicked [official] vehicles and tried to lynch the delegation has been misrepresented.” He blamed gang members for the attack and pointed an accusing finger at an “irresponsible press” that tried to use one photograph to “make [the protests] look like a massive uprising against the government”.

Other members of the ruling Justice and Development party (AKP) also came to Mr Yerkel’s defence. Speaking at a press conference on Friday, the deputy prime minister, Huseyin Celik, argued that Mr Yerkel’s alleged injury was proof enough for his innocence.

“Yusuf Yerkel made a statement. One cannot understand the entirety of a situation from only one photograph. Yusuf Yerkel said that the person he is kicking on the floor did in fact attack and hurt him, he was even granted sick leave for seven days.” – (Guardian service)