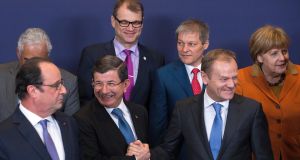 Turkey offered the European Union greater help on Monday to stem a flood of migrants into Europe but demanded more money, faster accession talks and quicker visa-free travel for its citizens in exchange, diplomats said.

Prime minister Ahmet Davutoglu said Ankara was willing to take back all non-Syrian migrants denied asylum in Europe as well as all those intercepted in its territorial waters, and to crack down harder on people smugglers, they said.

An emergency EU-Turkey summit, originally planned to last half a day, was extended to give Mr Davutoglu a chance to present “new ideas” going beyond Ankara’s commitments so far.

The 28 EU leaders would deliberate on his proposals in the afternoon and meet him again to discuss them over dinner, an EU official said.

“They [Turkey] are offering more and demanding more,” he said after the first working session. A spokesman for Mr Davutoglu confirmed that there were new proposals but declined to discuss the substance.

“I am sure these challenges will be solved through our cooperation and Turkey is ready to work with the EU,” Mr Davutoglu said on arrival for the summit.

“Turkey is ready to be a member of the EU as well. Today I hope this summit will not just focus on irregular migration but also the Turkish accession process to the EU.”

Among his demands, diplomats said, was to grant Turks visa-free travel in the EU from June instead of waiting for a planned October review of preparatory measures. One EU diplomat said Berlin and some allies were open to bringing forward the date if Ankara met all the requirements including changing its visa policy for Islamic states and introducing biometric passports.

EU leaders voiced concern and unease that the offer of increased co-operation coincided with a crackdown on media freedom that runs counter to cherished European values.

With tens of thousands of migrants stranded in Greece by closing borders, the summit may formally declare closed the Balkan route from Greece to Germany, although diplomats said Greek and German officials were fighting to soften the wording.

Leaders will pledge help to Athens cope with the backlog and seek assurances that Turkey, with Nato naval back-up in the Aegean, will stop people smugglers putting migrants to sea.

Dr Merkel and Mr Rutte, whose country holds the rotating EU presidency, spent five hours talking with Mr Davutoglu until 2.45am to try to nail down commitments to halt the migrant flow after more than one million people – mostly Syrians, Iraqis and Afghans – entered Europe last year, most ending up in Germany.

“It’s going to be a proper Turkish bazaar – first we will throw our hands up in the air expressing shock about Turkey’s demands. Then we’ll offer to meet a tiny, tiny, tiny part of what they want. And then we’ll see how the bargaining goes from there,” said one EU diplomat.

There were also continued divisions among EU leaders, with Dr Merkel resisting a push for a public endorsement by the summit of border closures by Austria and Greece’s Balkan neighbours.

Dr Merkel, who faces a possible political backlash in three regional elections on Sunday against her welcome for the refugees, insisted on the emergency summit to show voters the EU was acting to resolve the crisis.

Her finance minister, Wolfgang Schäuble, said on Sunday Berlin had major doubts about whether Turkey should become a member of the EU.

Before the meeting, EU officials told Mr Davutoglu of their concerns about human rights after the Turkish government seized control of a critical newspaper, top-selling daily Zaman.

European Parliament president Martin Schulz said he had told the Turkish premier that media freedom was “a non-negotiable element of our European identity” and they had differed sharply. The migrant crisis meant the EU needed to work with Turkey even if it was in “total disagreement” with its policies, he said.

German and Dutch government spokesmen said Dr Merkel and Mr Rutte had raised the issue with Mr Davutoglu, and French president Francois Hollande said the EU was and should remain extremely vigilant about press freedom and human rights in Turkey.

Nevertheless, the EU was taking care not to alienate Ankara just as hopes are rising of a solution to the migration problem.

Mr Tsipras said the bloc must speed up the process of relocating registered asylum seekers from Greece to other EU countries as promised last September. EU states have so far taken in only a few hundred of a promised 160,000 people.

A draft EU statement seen by Reuters said: “Irregular flows of migrants along the Western Balkans route are coming to an end; this route is now closed.”

However, negotiations were continuing and Berlin, Athens and the European Commission opposed that formula, officials said.

Nato said on Sunday a new naval force had approval to operate in Turkish and Greek waters to support a deal with Turkey to take back migrants halted in its waters and those who reach Greek islands but do not qualify for asylum.

Germany has been pushing for direct resettlement of thousands of Syrian refugees from Turkey. But diplomats say that is unlikely to be discussed in detail by other EU leaders until they see flows from Turkey are falling sharply.

Some 33,000 migrants are bottled up in Greece and about 2,000 more have been arriving daily.

British prime minister David Cameron said he was sending a naval force to the Aegean to join German and Canadian warships in the Nato force assisting the Greek and Turkish navies.

Though Britain is outside the Schengen zone and Mr Cameron stressed it would take no part in any common EU asylum policy, further migrant chaos could damage his efforts to win a June referendum and keep Britain in the EU.