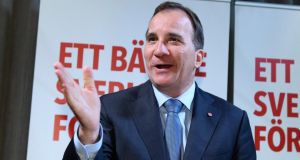 The Social Democrats topped the poll with 31 per cent, one of its worst-ever results, leaving Löfven’s potential centre-left coalition with the Greens and Left parties 15 seats short of a parliamentary majority.

“Sweden has voted for change and it will get it,” said Löfven, a former union official with no government or parliamentary experience. He said he hoped to secure support “beyond bloc lines”, a signal to Reinfeldt’s coalition allies.

The prime ministerial hopeful said his hand was “outstretched” to all other parties except the Sweden Democrats. It more than doubled its support, entering the next parliament with 12.9 per cent and a kingmaker role that its confident leader, Jimmie Åkesson, intends to exploit fully.

“Mr Löfven has promised we will not have any influence, but we don’t know how he’ll manage this as, today, we’ve a stronger grip on the balance of power than yesterday,” said Åkesson on Swedish radio.

The Sweden Democrats leader attributed his party’s success to its disciplined performance during the last parliamentary term (its first) and an election focus on problems the party attributes largely to Sweden’s liberal immigration policies.

The party has vowed to cut by 90 per cent Sweden’s intake of asylum seekers, currently among the highest in Europe.

“Considering a lot of negative press about the party in the final days, its real support is probably even higher,” said Dr Andrej Kokkonen, a political scientist and researcher on immigration issues at Gothenburg University.

The election result sparked a heated debate in Sweden yesterday about how best to deal with the Sweden Democrats and their demands on immigration. Kokkonen suggested that its stance would boost the party’s support still further and lead to eventual approaches from other parties.

“There is a repressed opinion in the conservative camp to at least co-operate with the [Sweden Democrats],” said Kokkonen. “It won’t happen overnight, but many local politicians in Sweden already react negatively to immigration.”

The Swedish result is the latest such success in Europe, mirroring wins for similar extremist parties in France, Denmark and Norway, where a far-right party is in office.

The Sweden Democrats’ success overshadowed the country’s shift left. It is now unclear if the Social Democrats uncertain whether the party will have enough support to form a stable government to deliver on its election promises.

The Social Democrats vowed to reverse privatisation of public services and raise taxes, and increase spending on education and welfare in the hope of stimulating Sweden’s economy and drive down a jobless rate of 8 per cent, the highest in Scandinavia. While Reinfeldt’s Moderates polled 23 per cent, his Centre Party and liberal Folkpartiet allies scored 6.1 per cent and 5.4 per cent respectively.

The Left wants to roll back privatisations further than Löfven’s party, while the Greens demand an end to nuclear power and the closing of Stockholm’s Bromma airport.

“The business community just wants a stable government. Even if they are more likely to vote for the centre-right, they can cope with a Social Democratic government as Mr Löfven is on the right wing of his party.”