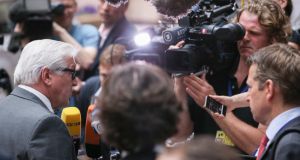 Minister for Foreign Affairs Charlie Flanagan has said that the European Union is unlikely to consider stronger so-called ‘phase three’ sanctions today, but may discuss adding “persons and entities” to the EU’s sanction list against Russia.

“The Irish position is to facilitate and encourage democracy in Ukraine. That is currently being hampered by aggression on the part of the Russians. We will be using every opportunity to condemn Russian aggression and it could well be in the course of the afternoon we will consider moving on the sanctions from a phase two position towards further entities and persons. The Irish position is to support that.”

Mr Flanagan also said that, while the short-term priority was ensuring the safe return of the remains of the victims of Flight MH17 to their loved ones and the preservation of the crash site to facilitate an independent investigation, the issue of Russian supply of arms into Ukraine was a concern.

“I think it’s important that we look at the medium term which is the continuous supply of arms to Ukrainian rebels by the Russians[...] that to my mind fundamentally undermines the democratisation of Ukraine and that will be to the fore in the course of our deliberations today.”

EU foreign ministers gather in Brussels today to discuss a collective response to the downing of a Malaysian Airline plane last week, as well as discuss the situation in Gaza.

While EU leaders last Wednesday agreed to widen the sanctions criteria the EU is deploying against Russia, any move to implement ‘phase three’ sanctions would necessitate a meeting of EU leaders. Mr Flanagan said this morning that a discussion of the issue “in another forum” before August 1st could not be ruled out.

In contrast to ‘phase two’ sanctions which impose travel bans and asset freezes on individuals and entities, phase three sanctions would place restrictions on certain sectors of the Russian economy, such as military sales and energy.

However, the 28 member states of the European Union remain divided about how to respond to Russia, with a number of countries wary of imposing Phase Three sanctions. While a number of countries are highly dependent on Russia for energy, other countries have significant trade links with Moscow, such as France which is currently proceeding with a €1.2 billion contract to provide two mistral warships to Russia.

On the situation in Gaza, Mr Flanagan said that it was important that an immediate ceasefire is called. “It’s essential that both the people of Gaza and the people of Israel are entitled to live their lives free of violence and under secure terms. I believe it is essential that there be a ceasefire at the earliest opportunity,” adding that some form of third-party intervention was likely.

He said the two-state solution remains the long-term objective for the Middle East.

“The two state solution is certainly [THE SOLUTION]in the long term. In the short term we have a situation where lives are being lost on both sides, and we will be urging restraint and an immediate ceasefire to allow for roundtable dialogue of some form to take place.”