Spain in uncharted waters as repeat election looms in June 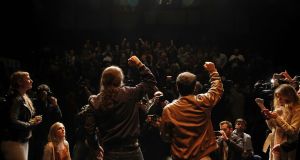 Podemos leader Pablo Iglesias (aged 37 - left) and United Left’s Alberto Garzón (30 - right) gesture in front of crowds during an event with supporters in Madrid, Spain, May 9th, 2016. The two have a preliminary agreement to form a coalition for taking part in another general election next month. File photograph: EPA

In a recent electoral video, acting prime minister Mariano Rajoy stares into the camera and drily says: “I know this might be tiresome for a lot of people and that’s logical. Because on December 20 we held elections in Spain and it wasn’t possible to reach an understanding and form a government.”

It’s an unusual way to appeal for votes, but the country is in uncharted waters, facing a repeated election for the first time ever, on June 26th.

Rajoy’s conservative Popular Party (PP), like all of the main political forces, is desperately seeking a strategy that will increase its vote share and unblock the country’s five-month impasse.

Opinion polls show that support for the main parties has barely moved in recent months. The PP would again win the most votes, according to the CIS national research centre, which also had the Socialist Party coming in second again.

New parties Podemos, on the left, and Ciudadanos, further right, would come in third and fourth, respectively, according to the same poll, as they did in December.

“We’re probably heading towards a situation where we have a similar jigsaw puzzle to the one we have right now, only some of the pieces will be a little bit bigger or smaller,” says Ignacio Escolar, editor of Eldiario.es newspaper.

“It’s almost certain that the PP will win the most votes,” he adds. “But in Spain, the winner is whoever ends up governing - and in that sense it’s not clear if Rajoy will be the victor or not.”

Having failed to persuade the Socialists to form a grand coalition in the wake of the last election, Rajoy has been a peripheral figure in recent months. Instead, the Socialist leader, Pedro Sánchez, attempted to build a governing coalition, reaching a deal with Ciudadanos but failing to secure the support of Podemos that he needed to become prime minister.

In recent days Rajoy has cast himself as the only serious electoral option, untainted by the frenzied negotiations of recent months.

“Our country finds itself at a new crossroads,” the acting prime minister said in his recent video. “Either the chance to build on a recovery, strengthen our growth and create jobs in Spain, or we slide down the path of uncertainty, instability and insecurity.”

Having overseen a fragile economic recovery, whose pace has been slowed by the political uncertainty, Rajoy’s appeal could be effective among voters who had strayed towards the regenerative message of Ciudadanos and who now want stability.

He is hoping such economic concerns will override voters’ worries about the litany of corruption cases tainting the PP.

In recent weeks the party’s image has been further muddied, with the industry minister resigning after he featured in the Panama Papers, and the mayor of Granada stepping down due to his links to a property scam.

While the main theme of the December campaign was the arrival of the new parties, Podemos and Ciudadanos, attempting to unseat the traditional PP and Socialists, this time the battle is likely to be fought on more classic left-right territory, says Fernando Vallespín, of Madrid’s Autonomous University.

“The new parties are looking older now,” he says, adding that he expects the PP and Podemos to try and dominate the campaign and “ignore the two parties in the centre”.

Podemos has struggled with internal disputes in recent months over the direction the party should take. However, in recent days it has closed a deal with the communist-led United Left (IU), to run on a joint ticket.

Podemos leader Pablo Iglesias (37) and IU’s Alberto Garzón (30) celebrated with an online video of themselves on the streets of Madrid, hugging and explaining the accord.

Rajoy and his party have gleefully presented the new leftist alliance as representing the kind of instability they had warned about. PP Eurodeputy Esteban González Pons described the agreement as “a kind of association between communist Cuba and populist Venezuela”, the latter a reference to past links between Podemos and the Andean country’s government.

Such comments are surely what Iglesias had in mind when he told a Podemos party rally in the Basque Country that he was aiming to defeat the PP by rising above “the insults, the lies and the pressure”.

While the deal with IU will alienate many of Podemos’s centrist voters, analysts believe it could prove a masterstroke, giving the former the kind of parliamentary weight they have lacked in recent years due to Spain’s electoral system, and potentially threatening the Socialists’ status as Spain’s primary leftist force.

Socialist leader Sánchez has been fighting on two fronts in recent months: both attempting, in vain, to form a government, and battling to quell unrest within his own ranks. He survived the aftermath of the last election, despite the worst result in his party’s modern history. On June 26th, the stakes will be even higher, for him and his adversaries.

1 One hundred Irish retailers for all your online Christmas shopping
2 School ordered to reopen after closing due to Covid-19 fears
3 Covid-19: Backlog forces HSE to skip calls to thousands of close contacts
4 Suzanne Lynch’s US Election Diary: Trump ‘walks out’ of TV interview at White House
5 'It’s his dishonesty, lack of character, his deceit' - ex-CIA chief excoriates Trump
Real news has value SUBSCRIBE