Some 71 people thought dead after airliner crashes near Moscow 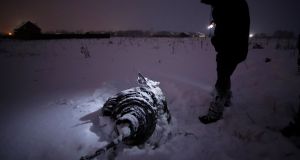 A man stands near a part of a Saratov Airlines Antonov AN-148 flight that crashed after taking off from Moscow’s Domodedovo airport, outside Moscow, Russia, on Sunday. Photograph: Maxim Shemetov/Reuters

There are no survivors from a passenger plane that crashed on Sunday near Moscow, Russia’s transport minister has said.

Maxim Sololov said that “judging by everything, no-one has survived this crash” after the An-148 regional jet went down a few minutes after take-off.

The flight disappeared from radar screens shortly after taking off from Moscow’s Domodedovo Airport.

News reports said 71 people – 65 passengers and six crew – were on board the plane heading for the city of Orsk, about 1,600km southeast of Moscow.

Wreckage was found in the Ramenskoye area, about 40km from the airport, which was laden in a heavy blanket of snow.

It was unclear whether there were any casualties among people on the ground at the crash site.

The Interfax news agency quoted Sergei Sheremetsinsky, a spokesman for the regional governor, as saying all the passengers were residents of the Orenburg region. Russia’s Investigative Committee said all possible crash causes were being investigated.

President Vladimir Putin postponed a planned trip to Sochi to closely monitor the investigation. He was due to meet Palestinian leader Mahmoud Abbas on Monday in the Black Sea resort where the president has an official residence.

Instead, Mr Abbas will meet Mr Putin in Moscow in the latter part of Monday, Kremlin spokesman Dmitry Peskov said.

News agency Tass said the plane had first flown in 2010, with a two-year break because of a shortage of parts. It was ordered by Rossiya Airlines, a subsidiary of Aeroflot, but had been placed in storage during 2015-2017.

Tass reported that the craft re-entered service for Saratov Airlines in February 2017.

The jet was developed by Ukraine’s Antonov company in the early 2000s, and was manufactured in both Ukraine and Russia. – PA