US News: president says ‘we’ll do a shutdown’ if his immigration demands are not met 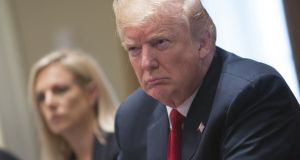 US president Donald Trump hosting a law enforcement round table at The White House on Tuesday. Photograph: Chris Kleponis/EPA

The US Congress is striving to find a deal to avoid a second government shutdown by midnight on Thursday when the short-term funding bill agreed last month expires.

Lawmakers in both houses of Congress are trying to assemble a deal on immigration which would include protections for “dreamers” – young people who were brought to the United States illegally as children. But Republicans are calling for funding to be included for the border wall, a contentious issue for Democrats.

The House of Representatives was due to hold a vote on a package on Tuesday evening, but it was not expected to gain support in the Senate.

In a measure of the difficulties ahead, president Donald Trump said he would “love to see a shutdown” if Democrats do not accede to his immigration demands. “We’ll do a shutdown. And it’s worth it for our country,” he said on Tuesday, as he hosted a round table discussion on the violent MS-13 gang. “If we have to shut it down because the Democrats don’t want safety – and unrelated but still related, they don’t want to take care of our military – then shut it down, we’ll go with another shutdown.”

Mr Trump’s comments came after he made a series of remarks about immigration on Twitter, including calling for an end to “chain migration” – the process whereby family members of immigrants are permitted to enter the country.

Mr Trump also reacted to the death of NFL player Edwin Jackson, who was killed in a car accident on Sunday morning. Police confirmed that the Indiana footballer and another man were killed by a drunk driver who entered the country illegally, having twice been deported.

Against the background of another turbulent day on the markets, politicians across both sides of the aisle were anxious to avoid another government shutdown

“So disgraceful that a person illegally in our country killed @Colts linebacker Edwin Jackson,” Mr Trump said. “This is just one of many such preventable tragedies. We must get the Dems to get tough on the Border, and with illegal immigration, FAST!”

Pressure on Congress to agree an immigration package also increased after White House chief of staff John Kelly said that Mr Trump is unlikely to extend DACA – the Deferred Action on Childhood Arrivals Bill which protects so-called “dreamers” – when it expires on March 5th. Mr Trump announced last September that he was abolishing the Obama-era scheme, giving Congress until March 5th to come up with a legislative solution.

Against the background of another turbulent day on the markets, politicians across both sides of the aisle were anxious to avoid another government shutdown, less than three weeks after the federal government closed for three days after Democratic senators refused to support a short-term funding bill.

One possibility under discussion in the Senate was a short-term measure to fund the government until March 23rd.

Meanwhile, the White House said Mr Trump would review a Democratic memo, released by the House Intelligence Committee on Monday, which purports to rebut the contents of a Republican-authored memo released last week which is highly critical of the FBI.

Mr Trump has five days within which to decide to release the memo publicly.

Mr Kelly said the document was “lengthy” and that Mr Trump would review it. It is possible that the memo could be published with redactions.