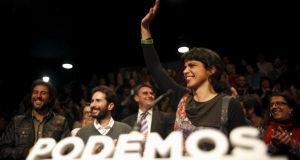 On Sunday night, when the results of the Andalusia regional elections started to emerge, most Spaniards were more likely to be following the soccer match between Barcelona and Real Madrid. But despite the attractions of the football clásico, the results of the vote in the southern region are likely to have greater repercussions across the entire country in what is going to be a busy electoral year.

Polls ahead of the election suggested it would mark the beginning of the end of a two-party political system that has been dominated by the Socialists and the conservative Popular Party (PP) for three and a half decades.

When the votes were counted, the combined share of those two parties did indeed plummet, from 80 per cent in the 2012 election to just over 60 per cent. However, that drop was largely due to the disastrous performance of the PP, which lost 14 seats, apparently the fallout of the many corruption scandals it has been linked to on a national level, as well as of the chronic unpopularity of prime minister Mariano Rajoy.

The Socialists, by contrast, maintained their 47 seats in the 109-seat regional parliament despite suffering a slight loss in terms of vote share. They also recovered their status as the leading party in the region, having governed for the past three years in a leftist coalition that kept the PP out of power.

“This is a historic and undisputable victory,” said the Andalusia region’s Socialist premier, the 40-year-old Susana Díaz, who must now seek a new governing partner in order to secure a majority.

The Socialists’ result was arguably trumped by the gains made by the new anti-austerity party Podemos. Formed in early 2014, it announced itself in last year’s EU elections, garnering five deputies. Sunday was its first electoral test since then and its 15 seats, while fewer than some analysts had predicted, mean it has arrived as a political force.

“The political map in Andalusia and Spain has changed,” said the party’s candidate, Teresa Rodríguez, after the results were announced.

“This isn’t a still photo, it’s a moving picture,” she added, a reference to the momentum Podemos has accumulated recently under the leadership of Pablo Iglesias, a 36-year-old university professor.

Although Podemos’s third place left it some way behind the Socialists and PP – the parties Iglesias has disparagingly labelled “the caste” – this performance in the Socialists’ biggest stronghold is likely to be improved upon in other parts of Spain, where the loyalties of leftist voters are looser. According to national polls, Podemos, which has close links to Greece’s Syriza, is Spain’s leading party in terms of voter intent.

The Andalusia election also showed the extent to which Podemos’s popularity is fuelled by economic and social discontent. The areas where it performed best are those where unemployment – a longstanding problem in Andalusia – is worst, such as Cádiz, with Spain’s highest jobless rate at 42 per cent.

“It’s clear that Podemos has managed to mobilise the desperate, the outraged, the unemployed and those who are sick of a two-party system that doesn’t fight with energy against corruption,” noted Javier Ayuso in El País newspaper.

The sense of regeneration was boosted by Ciudadanos, another party with a young leadership competing in its first Andalusian elections. With a more centrist platform than Podemos, its nine seats put it in fourth place and in a position to challenge the PP in upcoming elections.

Andalusia’s particular social history and economic realities make it something of an oddity among Spain’s 17 regions. However, its election results are expected to offer an insight into this year’s other votes. In May, all municipalities and most of Spain’s other regions will hold elections; in September, Catalonia votes; and a general election is expected by the end of the year.

For now, Spain’s much-questioned two-party system has just about survived its first test of the year. But the coming months are likely to present sterner challenges.