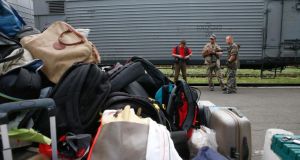 Armed pro-Russian separatists stand guard near the train transporting the remains of victims from the crashed Malaysia Airlines Flight 17 plane before its departure, with bags and suitcases of passengers seen in the foreground, yesterday. REUTERS/Maxim Zmeyev

“Everyone on the buses! Everyone still here should get on a bus and get away!”

As the lady screamed at her neighbours to flee shelling that had already killed four people living near Donetsk’s central railway station, Irina and her husband scurried between the waiting minibuses and made for their car.

Irina moved as quickly as she could, considering that she had recently left hospital and was cradling her tiny daughter in her arms. “Dariya is three days old,” she said, lowering herself gingerly into the back of the car as the baby slept in a white blanket.

“We are escaping to the Odessa region. How could we stay here?”

In the courtyard of an apartment block a few hundred metres away, a pair of old black shoes lay beside a hole gouged by a shell and the smeared blood of a woman who was killed when it struck yesterday morning.

The deadly shelling also complicated a bid to move the bodies of most of 298 people killed in the Malaysia Airlines disaster out of eastern Ukraine, and jeopardised efforts by international experts to investigate the Boeing 777’s fate.

The remains of passengers on last Thursday’s Amsterdam to Kuala Lumpur flight which disintegrated over eastern Ukraine were yesterday briefly examined by Dutch forensic specialists at a train station in the small town of Torez, about 80km east of Donetsk.

Wearing masks and using torches, they opened some of the refrigerated wagons that had been sitting on the platform since the early hours of Sunday, waiting for agreement between Kiev and the separatists about where they would go.

“I think the storage of the bodies is of good quality,” said Peter Van Vliet, leader of a Dutch team whose work was watched by dozens of rebel gunmen. “Now we hope that the train will leave so that we can do the necessary analyses.”

Mr Van Vliet said he had been given a “promise” that the train would depart, but he did not know when or where it would go.

Just after 7pm last night, the train and its grim cargo did pull out of the tiny station, but officials in Kiev could not confirm its destination.

Ukraine’s new pro-western leaders, who came to power after a revolution that ousted Kremlin-backed president Viktor Yanukovich in February, want the bodies taken to the government-controlled eastern city of Kharkiv, where a crisis response centre has been created.

A group of 23 international experts is in Kharkiv waiting to be given full access to the bodies and wreckage that is scattered over more than 10km, tracing the path of the doomed Boeing as it broke apart at about 33,000 feet.

It is still not clear when they will be able to fully examine the crash scene, but the rebels announced that a team of Malaysian officials had visited Torez yesterday.

“We will do everything we can to ensure the safety of foreign delegations,” said Alexander Borodai, the “prime minister” of what the separatists call the Donetsk People’s Republic.

Malaysia also announced that its officials would take possession of the airliner’s “black box” flight recorders from the rebels last night.

Kiev says the separatists struck the Malaysian airliner with an advanced surface-to-air missile brought from Russia along with other advanced weapons and many militant fighters, perhaps having mistaken it for a Ukrainian military cargo plane.

The airline disaster sharply intensified a crisis in Ukraine that has dragged relations between Russia and the west to their lowest point since the cold war.

While most of central and western Ukraine is disgusted with Russia for annexing Crimea in March and allegedly fomenting the insurgency in Donetsk and Luhansk regions, much of the east and south of the country still craves close ties with Moscow, is wary of Kiev’s new leaders and the EU, and believe Washington co-ordinated the anti-Yanukovich movement with an eye to wresting Ukraine from Russia’s orbit.

Scores of civilians have been killed since the government launched an “anti-terrorist” operation in eastern Ukraine in April, most through apparently indiscriminate shelling that Kiev and the rebels blame on each other.

As some people hid in basements and others filled bags and fled homes in Donetsk yesterday, it was hard to find a good word for Kiev or its allies.

“Ukraine’s leaders have sold the country to America,” said Marina (62), as a rebel tank rumbled past followed by speeding buses full of gunmen.

“They have betrayed us, and they are killing us.”