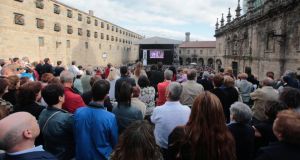 People watch a service in memory of the victims of the Santiago train crash on a screen outside the Cathedral of Santiago de Compostela. Photograph: Miguel Vidal/Reuters. 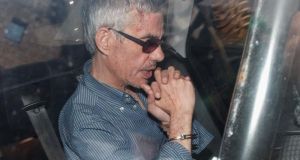 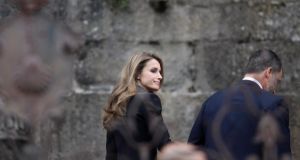 Spain’s Crown Prince Felipe (R) and Princess Letizia arrive to attend a funeral service in memory of the victims of the July 24th train crash at the Cathedral of Santiago de Compostela. Photograph: Miguel Vidal/Reuters.

Mourners in Spain packed a memorial service tonight for the 79 people who died in the country’s worst rail disaster in decades, as investigators prepared to analyse information from the train’s data recording device, or “black box.”

The driver of the train, 52-year-old Francisco Garzon, has been charged with 79 counts of negligent homicide and released pending trial after a judge determined he was not a flight risk.

Prime minister Mariano Rajoy and Prince Felipe were among mourners at the mass in the cathedral of Santiago de Compostela, site of a religious shrine in northwestern Spain where the high-speed train derailed after going through a tight curve too fast.

Investigators would begin analysing data from the train’s data recording device tomorrow, trying to discover how Mr Garzon exceeded speed limits despite a control system meant to force him to slow down, a court source told Reuters.

Prince Felipe, his wife Letizia, the Infanta Elena, Mr Rajoy, members of the cabinet and regional leaders stood near the front of the cathedral alongside many of the victims’ families and members of the emergency services.

Dozens of well-wishers gathered at the back of the cathedral and in the Plaza del Obradoiro outside.

“From the very first moment, the families that have lost their loved ones have been in our hearts and the hearts of Galicia and Spain,” Archbishop Julian Barrio said in his homily, adding that the families affected by a bus accident in Italy last night were also in his prayers.

After the service, Felipe, the Archbishop and political leaders passed amongst the mourners and offered individual condolences to the victims’ families.

Sixty-nine people remained in hospital today, with 22 in critical condition.

At 8.41pm local time on Wednesday the eight-carriage, high-speed train crumpled and caught fire after slamming into a concrete wall. The impact was so strong that one of the carriages was thrown several metres over an embankment.

Examining Magistrate Luis Alaez questioned Garzon in a two-hour hearing behind closed doors yesterday. Local media reported that Mr Garzon admitted to the judge that he took the curve too fast, saying he had a momentary lapse and forgot what part of the track he was on.

Still, investigators are looking into whether the train safety system was also to blame.

The disaster happened just a few kilometers before the Santiago station, on a part of the track where it is up to the driver to heed automatic signals in the cabin that warn him or her to slow to 80 km per hour after coming out of a high-speed section of track where speeds are up to 200 km per hour.

The judge ordered Mr Garzon to surrender his passport and to check in weekly with the court.

Mr Garzon has worked for state train operator Renfe for 30 years, 10 as a driver, and he had frequently driven the train between Madrid and the northwestern region of Galicia. His father also worked for the service and he grew up in Renfe-owned housing in northwestern Spain.

Neither lawyers nor members of Garzon’s family could be reached for comment.

Juan Jesus Fraile, secretary general of the SEMAF train drivers union, said he visited Mr Garzon in hospital after the accident, where he was treated for a head wound and chest trauma. Mr Garzon was released from hospital on Saturday.

“He’s a great professional, a great person, very prudent, and we found him very shaken up, restless and in a state of shock,” Mr Fraile said. After giving testimony to the judge Garzon was a bit more relaxed, Mr Fraile said.

The Alvia train involved in the accident, one of three types of high-speed service that run in Spain, received a full maintenance check on the morning of the journey, the head of Renfe said, and security systems were in good shape.

The Alvia trains run both on traditional tracks, where drivers receive warning signals to reduce speed, and on high-speed tracks where a more sophisticated security system will automatically slow down trains that are going too fast.