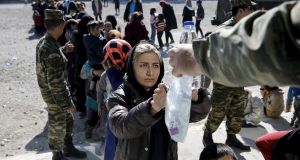 A migrant receives a portion of food and water as refugees and migrants line up during food distribution at a relocation camp in Schisto, near Athens, Greece on Thursday. Photograph: Alkis Konstantinidis/Reuters

EU justice ministers warned that progress must be made in tackling the migration crisis by a March 7th summit or the Schengen area risks collapse, amid continuing divisions between countries at a meeting of justice and home affairs ministers in Brussels.

“By March 7th, we want a significant reduction in the number of refugees at the border between Turkey and Greece, ” Mr de Maizière said.

With Thursday’s meeting yielding little in terms of concrete proposals, focus is already turning to next month’s EU-Turkey summit, at which EU leaders hope to see progress on Turkey’s implementation of the EU-Turkey deal signed last November.

In particular, EU officials are hoping to accelerate readmission rates from Greece to Turkey based both on the countries’ bilateral readmission agreement and the forthcoming EU-level agreement.

Turkey’s prime minister Ahmet Davutoglu is due to attend the summit.

Announcing the decision to withdraw the envoy, a statement by the Greek foreign ministers denounced what it described as a “19th-century” approach to the refugee crisis.

“Responsibility for dealing with the migration and refugee crisis cannot weigh on one country alone,” the ministry said.

Greece’s migration minister Yannis Mouzalas warned that Greece risked becoming the “Lebanon of Europe”, as it deals with the thousands of refugees arriving to its shores each week.

Following late night talks in Brussels, Nato overcame delicate sensitivities between Greece and Turkey, confirming that Greek and Turkish forces will not operate in each other’s territorial waters and airspace. Nato said that it would only stop migrant boats in distress.

It is not clear if the first mission will be operational before March 7th.

EU justice ministers also took stock of the European Commission’s proposal for a European border and coast guard, with the Dutch presidency pledging to reach political agreement on the proposal by June.

Meanwhile, Hungary defended its decision to hold a referendum on EU refugee quotas, clarifying that the ballot would apply to future proposals.

The country is already challenging the EU’s contentious refugee relocation plan in the European Court of Justice.

“Hungarians reserve the right to be heard on any potential future decision that would make such a set-up systemic,” Hungary’s minister for foreign affairs, Péter Szijjártó, said.

Addressing the meeting, Klaas Dijkhoff, migration minister for the Netherlands, which holds the EU’s rotating presidency, said that solutions needed to be found before the March 7th summit.

“If that doesn’t lead to lower numbers, we’ll have to find other measures and we’ll have to do more contingency planning . . . That’s a very crucial date to see to what extent we succeed in lowering the influx towards Europe as a whole, or we have to take other measures.”