Russia says it won’t deal with ‘mutineers’ in Ukraine 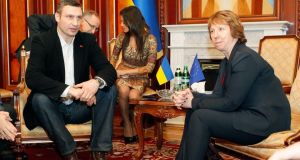 Russia said today it would not deal with those it said stole power in “an armed mutiny” in Ukraine, sending the strongest signal yet that Moscow does not want to be drawn into a bidding war with the West in its southern neighbour.

Querying the legitimacy of the new pro-European authorities after the Ukrainian parliament’s removal of the Kremlin-backed president following months of unrest, prime minister Dmitry Medvedev said he saw no one to do business with in Kiev.

He did not declare a $15-billion bailout for Ukraine dead, although its future is in question, but signalled that a deal which cut the price Ukraine pays for Russian gas had an expiry date and that any extension would have to be negotiated.

With president Vladimir Putin still basking in the afterglow of Russia’s success at the Sochi Winter Olympics, it has been left to aides to address a crisis that has not turned out as he wanted and reduced Russian clout in Ukraine.

Mr Putin’s silence about the fall of Viktor Yanukovich has been filled by allies’ accusations of betrayal in Ukraine, of a Western-orchestrated coup and suggestions that there could be a split or civil war in the ex-Soviet republic of 46 million.

“Strictly speaking there is no one to talk to there. There are big doubts about the legitimacy of a whole series of organs of power that are now functioning there,” Mr Medvedev told Russian news agencies.

“Some of our foreign partners think differently, they believe they are legitimate ... I don’t know which constitution they’ve read ... But it seems to me it is an aberration to call legitimate what is essentially the result of an armed mutiny.”

Russia’s top general agreed with Nato to maintain contact on a crisis that has raised fears of civil war and which UN chief Ban Ki-moon said called for an “inclusive political process” that “preserves Ukraine’s ... territorial integrity”.

Ukraine’s new authorities issued an arrest warrant today for mass murder against Yanukovich, now on the run after being toppled by bloody street protests in which police snipers killed opposition demonstrators.

Many in Ukraine are wary of opposition leaders like Yanukovich’s arch-rival Yulia Tymoshenko, whose record in government before him was mixed.

Ms Tymoshenko, who was released from a prison hospital on Saturday having served more than two years on graft charges, said today she will go to Berlin for treatment. She is widely expected to run in a presidential election parliament has set for May 25th.

The former Soviet republic appealed today for financial assistance to stave off bankruptcy; its debts include more than $1 billion in unpaid gas bills to Russia for 2013.

Prices are negotiated each quarter - one of the last levers Moscow could pull in a battle with the West for influence in Ukraine, which was under Moscow’s thumb in the Soviet era.

“The decision in the gas sphere, which was adopted, has concrete time periods for implementation,” Mr Medvedev said.

“What will happen after these expire is a question for discussion with the leadership of Ukrainian companies and the Ukrainian government, if one emerges there.”

Officials at state gas company Gazprom made clear they were waiting for a signal from the Kremlin to act.

The Foreign Ministry also took a firm line, portraying the new authorities in Kiev as extremists and accusing the West of making “unilateral, geopolitical calculations”.

The strong language is partly intended to sell the new situation to a Russian public which until this weekend had been told Moscow had backed a winner in Yanukovich.

On the air waves and in print, outrage and dismay over Yanukovich’s political demise has given way to derision towards a leader who allowed Ukraine to slip from his grasp and open the gates of power to brothers who “in fact, hate us”.

As the popular Russian daily Moskovsky Komsomolets summed it up: “Yanukovich falls - Whatever”.

While Mr Putin made little effort to hide his distaste in dealing with Yanukovich, a former electrician who vacillated over closer ties with the EU or with Russia, he may now have to argue that both he and his successors are illegitimate rulers.

“Yanukovich is now a wanted man. Just four days ago, everything depended on him and he was needed by everyone. Now he’s just needed by those who want to arrest him,” said Alexei Pushkov, a Putin loyalist and a senior member of parliament.

“When we talk about ‘brotherly’ Ukraine, we must take into account that half of the population does not consider us brothers, and the radical part just hates us.”

He may alternatively have decided that the economic cost of winning over Ukraine in December was too high, and that it is better to let the EU foot the bill. Or, as one Ukrainian analyst suggested, it may not have a clear policy yet.

“Russia has no strategy on Ukraine at the moment. Russia is not delighted with what happened, but has already shown that the relations between the two countries have cooled,” said Volodymyr Fedosenko of the Penta think tank in Kiev.

“Russia will express doubts about the legitimacy of the new government and indirectly support resistance, but Russia will be forced to recognise the new authorities because there is no alternative.”