Russia refuses to help Cyprus until EU bailout is agreed

Russians have tens of billions of euro in island’s banks 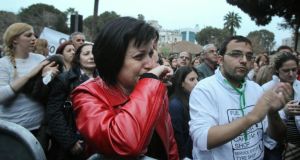 A protester cries during a rally by employees of Cyprus Popular Bank outside the parliament in Nicosia this week. Photograph: Andreas Manolis/Reuters


Russia has sent Cyprus ’s finance minister home emptyhanded and said it will only consider helping the stricken island once it has sealed a bailout deal with the EU.

Michael Sarris failed in his two-day mission to Moscow to secure a financial lifeline for Cyprus, where tens of billions of euro in Russian money are stashed in ailing banks and many Russian firms operate to exploit low tax rates and light regulation.

Nicosia had hoped to tap its old ally Russia for at least some of the €5.8 billion it needs to persuade the EU to release a promised €10 billion bailout.

Cyprus did not even succeed in the most modest of its aims: to secure a lower interest rate and longer repayment period on a €2.5 billion loan it took from Russia in 2011.

Mr Siluanov also revealed that the possibility of Russia lending more money to Nicosia was ruled out after the EU said such a move would be pointless because it would only add to the already unsustainable mountain of debt that is crushing the Cypriot economy.


‘Absurd’ plan
Russian prime minister Dmitry Medvedev, who decried as “absurd” an EU plan to levy a 9.9 per cent tax on savings of more than €100,000 in Cypriot banks, said Moscow could help the island at some point in the future. “We didn’t close the doors, we didn’t say that we wouldn’t discuss anything or that we don’t want to hear anything. But Cyprus is simply a member state of the European Union, ” Mr Medvedev said in Moscow alongside European Commission president José Manuel Barroso.

“We have our economic interests there, and we will be ready to discuss different types of help to this state . . . but only after a final plan is worked out by EU states and Cyprus itself. Only in that case could Russia become part of this process,” Mr Medvedev added.

Analysts said Russia may have been reluctant to commit to helping Cyprus because it was still unsure whether a final bailout package would see individuals and companies with bank accounts in Cyprus – many of them Russian – hit with a one-off levy.

Moscow was furious it was not consulted by Cyprus and the EU when they negotiated a bailout that included such a tax. Parliament in Nicosia rejected that deal this week, but Russia has made its displeasure over any such move clear and issued several thinly veiled threats to Cyprus.


Tax haven
Mr Medvedev has suggested Russia may scrap its dual-taxation deal with Nicosia, which would prompt Russians to abandon the island in search of another tax haven.

He also said Russia should create its own “offshore” zone to lure home Russian cash and attract foreign money.

Moody’s credit rating agency says Russian firms and individuals have about €24 billion in Cypriot accounts, and Russian banks have as much as €31 billion in outstanding loans to firms registered in Cyprus.

Furthermore, many individuals and companies listed as Cypriot are actually Russian, meaning Russia’s exposure could be greater than estimated by Moody’s.

The financial operations of Russian firms could also be badly affected by any capital controls imposed on Cypriot banks in the days ahead.

Uncertainty over the impact of the Cypriot crisis dragged down Moscow’s main stock market. The Micex index’s 3.6 per cent fall in five days is its biggest weekly drop since last May.


Market concern
“The market is concerned that Europe might disregard Russia’s interests in Cyprus’s bailout and the deposit levy might happen after all,” said Alexei Yazikov, head of research at Aton Capital investment group in Moscow.

“The Cyprus-Russia talks led to nothing, the situation is the same. About 30 per cent of Cyprus’s banking system consists of Russian money.”