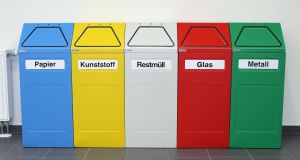 Coloured recycling bins in Aurich, Germany. The simple task of throwing things away in the country is not for the faint-hearted. Photograph: Sean Gallup/Getty Images

To the naked eye, it looks like two used tissues and a used coffee filter.

But not in Germany and certainly not in the yellow bin. And now the apartment block that owns the bin has been accused of committing one of the gravest of German crimes: not sorting their rubbish properly. The fine: €1,785.

The apartment residents have refused to pay, triggering a bin battle that shines a light on the dark underbelly of daily life in Germany.

The crime against recycling took place last April when two rubbish investigators from the company Cont-Trans in the city of Stendal, an hour west of Berlin, inspected the yellow bin.

“They then photographed it and then left the bins be,” said Thomas Larek, manager of the apartment block. “They often root through the containers and, if there’s something in the 240 litre container that shouldn’t be, they aren’t emptied.”

A day after the disturbing find, Mr Larek received a bill for “extensive waste controls”.

Quizzed by the Bild tabloid about charging nearly €1,800 for its sting, the waste company said: “Our employees have to check containers in advance to document incorrect disposal. That takes 35 to 40 hours.”

Mr Larek has refused to pay the bill on behalf of the residents, accusing the waste company of “Stasi methods” and the case of the used tissues and coffee filter has ended in court, with a verdict due on December 7th.

The case has disturbed the army of deceptive disposers all over Germany, where the simple task of throwing things away is not for the faint-hearted.

On the one hand, the rules promise certainty and simplicity. The brown containers take organic waste. Packaging and scrap materials in the orange or yellow bin, while paper is in the blue. As so often in Germany, however, those rigid rules collide with the harsh reality of decentralised government.

Because waste is regulated locally, not centrally, which bin takes that used yogurt container varies from one state and city to another. In major cities, the rules can change from one neighbourhood to another.

In one city district, cardboard boxes go in the paper container no matter what. Cross the street, into a new neighbourhood, and so-called “treated” paper containers may need to go into the yellow bin. Forget where you are and you too may find yourself inside a modern reboot of Franz Kafka’s The Trial: The Bin.