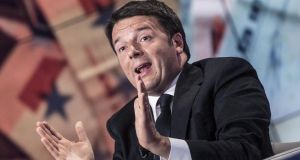 Italian prime minister Matteo Renzi: “The EU has accepted the problem is not only Italy’s. It has agreed to send ships but now they have to accept the quota system.” Photograph: EPA/Angelo Carconi

Matteo Renzi, Italy’s prime minister, has accused other EU members states of shirking their responsibility to accept asylum seekers after Spain and France appeared to rule out accepting mandatory quotas of migrants as proposed by the European Commission.

Earlier this week, Spanish foreign minister Jose Manuel Garcia-Margallo said Spain was not in a position to accept migrants, given its high unemployment rate.

French president François Hollande also appeared to pour cold water on the commission’s proposal for mandatory relocation of migrants following a meeting with German chancellor Angela Merkel in Berlin on Tuesday, telling reporters that quotas were “out of the question”.

French officials, however, moved to clarify the French position yesterday, pointing out that France would take its fair share of migrants, though it is understood to oppose quotas.

The commission last week unveiled an ambitious “European agenda on migration”. It proposes a resettlement programme for 20,000 refugees residing outside Europe and a more controversial proposal to relocate migrants who have already arrived in Europe across EU member states based on a distribution key.

Ireland, along with Britain, has an automatic opt-out of most EU asylum and migration legislation, with the result that it would actively have to “opt in” to any mandatory relocation programme. Britain has said it will not participate in any mandatory programme.

At the very least, the European Commission is expected to fine-tune the plan when it publishes the legislative proposal on May 27th. This could include further specificities around which category of migrant will be included in the scheme, with some member states willing to open the scheme to refugees but not economic migrants.

Speaking on Italian public television yesterday, Mr Renzi said that the EU must embrace the quota system proposed by the commission.

“The EU has accepted the problem is not only Italy’s. It has agreed to send ships but now they have to accept the quota system,” he said. “Britain immediately said it was against and was pulling out . . . now France and Spain have posed problems about the methods of calculating the quotas.”