‘We’re going our way, you go yours,’ Turkish president tells EU on deal to curb migration 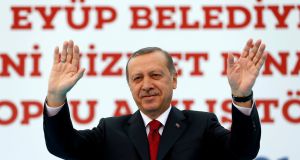 Turkish president Tayyip Erdogan: “When Turkey is under attack from terrorist organisations and the powers that support them directly, or indirectly, the EU is telling us to change the law on terrorism.” Photograph: Murad Sezer/Reuters

President Recep Tayyip Erdogan told the European Union on Friday that Turkey would not make changes to its terrorism laws required under a deal to curb migration, and declared: “We’re going our way, you go yours.”

His fiery speech will be a blow to any hope in European capitals that it might be business as usual with Turkey after prime minister Ahmet Davutoglu, who negotiated the migration deal with Europe and had largely delivered on Turkey’s commitments so far, announced he was standing down.

The EU asked member states on Wednesday to grant visa-free travel to Turks in return for Ankara stopping migrants reaching Europe, but said Turkey still had to change some legislation, including bringing its terrorism laws in line with EU standards.

“When Turkey is under attack from terrorist organisations and the powers that support them directly, or indirectly, the EU is telling us to change the law on terrorism,” Erdogan said in a speech at the opening of a local government office in the conservative Istanbul district of Eyup.

“They say ‘I am going to abolish visas and this is the condition.’ I’m sorry, we’re going our way, you go yours. Agree with whoever you can agree,” he said.

Visa-free travel is, for many Turks, the biggest benefit of Ankara’s deal with the EU. Europe, meanwhile, is counting on Turkey to maintain an agreement that has helped stem the flow of refugees and migrants via Turkish shores, which saw more than a million people reach Greece and Italy last year.

Davutoglu’s departure consolidates the power of Erdogan, who has been highly critical of the EU in the past and who is seen in Brussels as a far tougher negotiating partner less closely wedded in recent years to Turkey’s ambition of joining the EU.

To win visa-free travel, Turkey must still meet five of 72 criteria the EU imposes on all states exempt from visas, one of which is narrowing its legal definition of terrorism.

Rights groups say Turkey has used broad anti-terrorism laws to silence dissent, including detaining journalists and academics critical of the government. But Ankara insists the laws are essential as it battles Kurdish militants at home and the threat from Islamic State in neighbouring Syria and Iraq.

Turkey’s EU minister Volkan Bozkir was earlier quoted by the Daily Sabah newspaper as saying Turkey had already made some changes requested by Europe, including reference to “the concept of immediate and obvious danger that threatens public security”, but that it “does not have the luxury” of making any more.

Erdogan said there would be no gap in Turkey’s governance after Davutoglu’s departure and that the episode demonstrated why the country needs a full presidential system, a matter he said urgently needed to be put to a referendum.

Opponents fear an executive presidency will consolidate too much power in the hands of an authoritarian leader, a sentiment shared by some European leaders who fear his ascent will make relations with Turkey more complicated in the years ahead.

Erdogan bristles at suggestions that Turkey uses its anti-terrorism laws indiscriminately. He has repeatedly stressed his determination to crush Kurdish militants fighting an insurgency in Turkey’s southeast, and is unlikely to sanction Ankara backing down on the European demands.

Much may depend on the ability of whoever replaces Davutoglu, a decision to be made at an extraordinary congress of the ruling AK Party on May 22nd, to convince European allies that Turkey has already done enough.