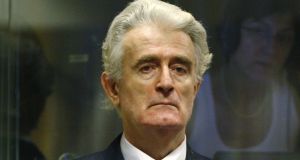 Former Bosnian Serb leader Radovan Karadzic denies the charges and told judges “The war did not happen as I wanted it.”. Photograph: Jerry Lampen/Reuters

The Yugoslav war crimes tribunal is to announce verdicts against former Bosnian Serb leader Radovan Karadzic next month following his long-running trial on charges including genocide for allegedly masterminding atrocities throughout the Bosnian war.

The United Nations court announced on Thursday that judges will give their verdicts at a hearing on March 24.

Prosecutors say Karadzic should be sentenced to life imprisonment if he is convicted. He faces 11 charges including genocide, murder and rape.

Karadzic has always denied he was responsible for crimes during the war.

As his trial closed in 2014, Karadzic told judges: “The war did not happen as I wanted it.”