World review of the year: His pride at ‘returning’ Crimea to Russia still costing the country 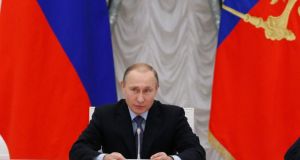 Russia secured its return to the top table of world diplomacy this year, but it cost the country another powerful friend and increased the burden on an economy that is paying a heavy price for the Kremlin’s aggressive foreign policy.

President Vladimir Putin’s decision to intervene militarily in Syria distracted Russians from his failure to halt Ukraine’s pivot to the west and forced Washington to engage with Moscow over the fate of the Kremlin’s closest ally in the Middle East.

Rare agreement between United Nations Security Council members yielded a resolution on the Syrian crisis this month, but the “road map” it laid out for the ravaged country did not define the future role of its president, Bashar al-Assad.

Putin wants to preserve Russia’s influence in whatever Syria emerges from the war, including the military bases from which it is now launching air strikes, but Assad is unacceptable to the West and Turkey, as well as to millions of his own compatriots.

Russian state media gushingly credit Putin’s Syrian gambit for breaking the diplomatic isolation that came with his aggression in Ukraine, but his supposed master stroke has also deepened international enmity towards Moscow.

US and EU sanctions

A row over whether the Russian jet was in Turkey’s air space and the wisdom of Ankara’s response was followed by Moscow imposing sanctions on Turkish goods and banning package holidays and charter flights between the two countries.

It also prompted a typically salty quip from Putin, who wondered aloud whether the incident had occurred after “the Turkish leadership decided to lick the Americans in a particular place”.

It was not a comment to soothe ties between Russia and Turkish leaders who are quick to take offence, or between powerful countries with a long history of rivalry over a vast area from the Black Sea to China’s western border.

The dispute could have repercussions across this energy-rich and somewhat unstable region, where a 25-year-old conflict still rumbles between Ankara-backed Azerbaijan and Moscow-allied Armenia.

The Russian president’s pride over “returning” Crimea to Russia is still costing the country dear, with huge investment required to bring its tourist facilities up to scratch and to prevent a repeat of recent major power cuts in a region that still relies on Ukrainian energy.

With sanctions biting into Russia’s economy – and just extended for another six months by EU states – and oil trading at well below the $50 a barrel on which Russia’s 2016 budget is based, more hardship lies ahead for Putin’s compatriots.

His lavish military spending continues, however, as Russians witness a renewal of what they call the battle between the “television” and the “fridge” – a metaphorical struggle between jingoistic propaganda and deepening economic woe.

State media now give blanket (positive) coverage to Russia’s bombing campaign in Syria and devote far less time to Ukraine, where until recently a “fascist junta” was supposedly subjecting the country’s Russian-speakers to daily terror.

Russian opponents of Ukraine’s drive for western integration believe the effort will implode and the country will return to the Kremlin fold, but Kiev’s reformists have muddled through so far, under close US and EU scrutiny.

Putin’s “hybrid” war in Ukraine has prompted Nato to ramp up its presence in central Europe and the Baltics, and the alliance has just given a membership invitation to Montenegro, with which Russia has strong ties.

Putin offers a belligerent foreign policy as panacea for Russians’ economic pain and uses aggressive patriotism to stifle criticism and deflect discontent, but his long-term strategies for Russia and relations with the West remain unclear.

Some fear that after 16 years in power, Putin now sees Russia’s constant involvement in foreign conflict as the best way to keep this vast country under control.