Not everyone is knocking Germany’s brave new world 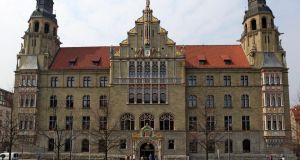 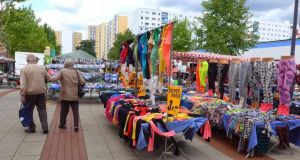 A street market in Halle, where construction of the new city quarters began in July 1964. Photograph: Derek Scally

Hearing the squelch underfoot I lift my shoe gingerly, fearing the worst. Instead of what I expect to find, I discover the juicy remains of a golden mirabelle plum from a nearby tree.

Not for the first or last time today I have stumbled across something unexpected. Usually when visitors come to Halle they stick to the pretty old town where the composer Georg Friedrich Händel was born in 1685. The city, first mentioned in 806 AD, has been through the wars since then – hot and cold – and all have left their traces.

Today Halle is the most populous city in Saxony-Anhalt, a state that has sometimes struggled in the transition since 1989, with a jobless rate of 10 per cent. Not that the humourous locals let it show: two days in Halle held more laughs for me than an average two weeks in Berlin.

Looking in as an outsider, but a regular visitor, Saxony-Anhalt’s economic struggles pale in comparison to its cultural and architectural riches: countless castles, half-timbered Hansel-and-Gretel houses in Quedlinburg, and the Bauhaus bonanza that is Dessau.

Irish soccer fans can make up their own mind about Halle next month when the U-21 side plays Germany here on Friday week. But today we’re leaving the old town and heading west across the Saale river where, half a century ago, East German authorities created a brave new world: Halle-Neustadt, literally Halle-New City.

Construction began in July 1964 to house the workers from nearby chemical plants. Just a year later, the first residents moved into what would become one of East Germany’s largest and most ambitious Plattenbausiedlung, a vast precast concrete jungle.

Halle-Neustadt was a revolution in more ways than one: residents were given modern apartments with hot water and central heating; kindergartens, schools, shops and other services arrived in parallel with the flats. Halle-Neustadt chief architect Richard Paulick and his team also pioneered a new shell construction method, used later all over Europe.

Today even the planners’ smaller but significant touches colour the development: almost 100 outdoor works of art and design and urban orchard in parks and along streets, allowing residents pick their fill of blackberries, cherries and mirabelle plums.

“It was a development that just worked from the beginning,” said Kerstin Hoffmann, born and raised in Halle-Neustadt and now a member of the city’s planning department. “It was designed as the city of short distances and it fulfilled that function.”

The end of East Germany, and the collapse of nearby chemical plants, robbed Neustadt of its original function. Mass unemployment followed and countless locals headed west for work; many families who stayed in Halle left Neustadt for new houses in the greenbelt.

The population collapsed from 96,000 in 1989 to around 45,000 today, with a high proportion of pensioners, migrants and welfare recipients. The outlook was bleak but, rather than follow the European trend to demolish such developments, Halle decided to persevere. HlH

In 2002 it launched an International Building Exhibition, re-examining every corner of the town. A €37 million urban renewal project saw hundreds of apartments on the outskirts demolished, concentrating the population into the centre. Tired East German facades were freshly plastered and painted and, inside, the remodelled apartments are as startling as out: bright rooms, luxurious bathrooms and spacious balconies.

The mother of invention

The East German Plattenbau has been derided for decades as disposable, sub-standard architecture. But in Halle-Neustadt intelligent investment as well as necessity, that famous mother of invention, have shown the Platte can be durable, flexible — and popular.

Dr Ernst Isensee is managing director of the BWG housing co-operative, one of three in Halle. He points to surveys showing that 90 per cent of Neustadt residents wouldn’t want to live anywhere else. Like Claudia Bock, still living happily in the 10-storey apartment block where she was born 35 years ago.

“We have a third generation living here now. We even celebrated last Christmas with our neighbours,” she said. “The children play in the meadows around the apartments like when I was small, it’s just so green here.”

There is also a grim side to Halle-Neustadt, like the tense no-go areas where a kebab shop owner talks darkly about his alcoholic customers. Neither can you overlook the city’s biggest architectural problem: the five trademark Scheibe or “Slice” towers on the main shopping street, in desperate need of renovation – or removal. Nothing has happened though for years thanks to a long-running dispute between their owners and the city.

At the local “welfare department store” selling second-hand furniture and clothes, the daily special of “all trousers for €1” has attracted few customers. Manager Andreas Walkow says the 25 per cent local jobless rate means business will be slow until welfare payments land at the start of next month.

“The regularity of the East German times won’t come back and I sometimes feel that Halle-Neustadt is neither here nor there,” said Mr Walkow, (53), like many locals a former chemical factory worker. “Still, I think the good outweighs the bad.”

Among the good in Halle-Neustadt you can count the Dandelion, a multi-generational community centre that has won a stack of awards for gathering under one roof community services and courses from job counselling and German for migrants to Zen meditiation classes and ping-pong for pensioners.

“You can’t overlook Halle-Neustadt’s serious problems, like a child poverty rate of 66 per cent,” says Jana Kirsch, centre co-ordinator and a neighbourhood manager. “But we offer people a place to go and try to engage them so they feel proud of their neighbourhood.”

A quarter century after East Germany failed, the forecast was that its model socialist cities wouldn’t be far behind. Across eastern Germany, however, determined locals have defied the predictions. Halle-Neustadt has survived and its proud locals, celebrating the town’s 50th birthday, are already looking forward to the next half century. As local boy Händel might say: Halleluiah.