No revolution likely on EU reform 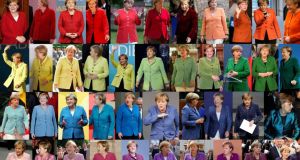 The many different jackets worn by German chancellor and leader of the CDU Angela Merkel for public appearances. Photograph: Reuters

Germany’s lacklustre federal election campaign has gone down to the wire as voters decide tomorrow whether to renew their vows with Angela Merkel.

From mother of the German nation to European mother superior, the East German pastor’s daughter has come a long way since being plucked from political obscurity in 1990.

Stable economy
Dr Merkel – “Angie” to her placard-waving fans at rallies – has run a low-risk, personalised campaign portraying herself as the safe choice and her opponents as a risk to German economic stability, the EU and its shared currency.

But the vote is an election of political parties, not personalities, and final polls yesterday put Dr Merkel’s outgoing coalition just shy of a parliamentary majority – largely due to an ailing partner, the liberal Free Democrats (FDP). Strategic voting may see a late FDP rally, or the party may crash out of the Bundestag.

Either way, it is unclear whether Merkel can count on them or will need a new partner.

But Mr Steinbrück’s preferred coalition is 10 points short of a parliamentary majority after revelations about the Green Party’s paedophile-friendly politics in the early 1980s.

The two most likely outcomes are a return of the outgoing administration or an CDU-SPD grand coalition, a repeat of Chancellor Merkel’s first term. Mr Steinbrück says he is unwilling to work again with Dr Merkel, after four years as her first-term finance minister. But his party is already said to be open to an approach. Mr Steinbrück has also ruled out unseating Dr Merkel with a three-party coalition with the Greens and the far-left Linke.

Eurosceptic advance
Suspense is building around the Eurosceptic Alternative for Germany (AfD).

After peeling away support from the CDU and FDP with a campaign criticising euro crisis bailouts, final polls put the party just one point short of the Bundestag’s 5 per cent hurdle.

In a nod to the uncertain election result, all candidates will break with tradition and campaign right up until this evening.