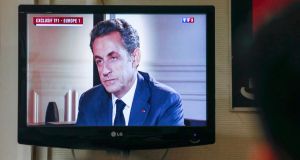 To the French right, it was political persecution and a plot to undermine Nicolas Sarkozy’s eventual return to power. To the left, it was the country’s justice system doing its job and showing that no man is above the law.

But last night it was Mr Sarkozy’s turn to speak after a day in which he was put under formal investigation for allegations of corruption, trafficking influence and receiving information violating professional secrecy.

The move came more than 15 hours after he was first summoned to a police station on the outskirts of Paris and told he was being held in custody.

Three others, Mr Sarkozy’s lawyer Thierry Herzog and two magistrates, have also been put under investigation in the case. All deny any wrongdoing.

Last night, Mr Sarkozy appeared on television for the first time since leaving the Élysée Palace in 2012 to claim the justice system was being used as a “political instrument” against him and to lash out at the magistrates and France’s socialist government.

“In our country, the country of human rights and the right of law, there are things that are being organised . . . everything is being done to give an image of me that is not the truth. To all those watching and listening, I want to say that I have never betrayed their confidence. I have never committed an act against republican principles or the law,” he said.

Wearing a sombre suit and tie, the former president looked tanned and clean-shaven and came out fighting, describing the accusations as “grotesque”, and accusing the judges of being politically biased and determined to humiliate and destroy him. “I am profoundly shocked about what has happened. I don’t ask for any privileges – if I have committed errors I will take the consequences. I am not a man to flee my responsibilities,” he said.

He added that in 35 years in public life, no other politician had come under such legal scrutiny, but no evidence had been found against him and his record was clean. “I have nothing to be ashamed of. Nothing.”

Financial daily Les Echos described it as a “spectacular measure”, coming as he plans his political comeback.

As the aftershock spread through French political circles, his prime minister, Manuel Valls, said: “The facts are serious. This relates to magistrates, top-ranking magistrates, a lawyer and a former president of the republic. But as head of government, I must respect the principles of the independence of the judiciary and the presumption of innocence.”

Asked if Mr Sarkozy was “subject to the same justice as others”, Mr Valls replied: “Yes, of course.” – (Guardian service)