Nice attack: Who was the killer and what motivated him?

Islamic State claimed Mohamed Laouaiej-Bouhlel as one of its ‘soldiers’ 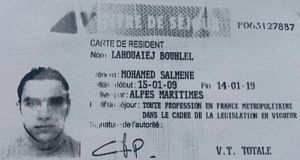 A reproduction of the residence permit of Mohamed Lahouaiej-Bouhlel, the man who rammed his truck into a crowd celebrating Bastille Day in Nice on July 14th.

Islamic State has claimed Mohamed Laouaiej-Bouhlel, the 31 year-old Tunisian who killed 84 people by mowing them down with a refrigerated lorry on July 14th, as one of its own.

“The author of the operation in Nice, France, is a soldier of Islamic State,” said a report posted by the group’s “press agency,” Amaq, on Saturday morning.

It was Amaq that declared Islamic State’s responsibility for the November 13th, 2015 attacks that killed 130 people in Paris.

Yet the statement did not dispel doubts about the nature of the murderer’s links to the group, which is also known as Isis. “He carried out the operation in response to appeals to target citizens of countries that belong to the coalition that is fighting Islamic State,” it said.

There was no mention of precise orders, or even of Laouaiej-Bouhlel’s allegiance.

Speaking after a defence council meeting on Saturday morning, French interior minister Bernard Cazeneuve said that based on the questioning of five members of the killer’s circle who were arrested on Friday and Saturday, the authorities concluded that he “became radicalised very quickly.”

If Laouaiej-Bouhlel organised the massacre on his own, he may have been influenced by an appeal issued by Islamic State’s spokesman, Abu Mohamed al-Adnani in 2014. The methods prescribed by al-Adnani have been termed “low-cost terrorism” or “lumpen terrorism”.

“Kill the infidel, whether he’s a civilian or a soldier,” al-Adnani’s statement said. “Hit his head with a stone, slash his throat with a knife , run him over with your car, throw him from a high place, strangle him or poison him.”

Despite the statements by Islamic State and the French interior minister on Saturday, there is far more evidence that Laouaiej-Bouhlel was mentally unstable than that he rallied to the extremist group.

Laouaiej-Bouhlel did not attend mosque, did not fast during Ramadan and did not appear on any watch list of radical Islamists. He did not transmit a photograph of himself with an Islamic State flag, like Yassine Salhi - also a delivery driver - who beheaded his boss near Lyon 13 months ago. (Salhi used the flag as the backdrop to a “selfie” of himself with his victim’s severed head.)

Nor did Laouaiej-Bouhlel record a pledge of allegiance to Islamic State, like Omar Mateen, who killed 49 people in a gay nightclub in Orlando last month, or Larossi Abballa, the “lone wolf” murderer of a French policeman and his wife, a police secretary, in their home outside Paris on June 14th.

Laouaiej-Bouhlel had been forced by court order to leave the home he shared with his wife and three children 18 months ago, because he beat his wife. In his home town of Msaken, near Sousse, Tunisia, his father, told the Agence France Presse that his son suffered a nervous breakdown in the early 2000s.

“When he got angry he yelled and broke everything around him,” Mohamed Mondher Laouaiej-Bouhlel said. His son was not interested in religion, he added.

An inhabitant of the high-rise building where Laouaiej-Bouhlel had lived with his family said he was unstable. “When he split up with his wife, he defecated everywhere and shredded his daughter’s teddy bear with a knife,” he said.

Laouaiej-Bouhlel was often seen carrying his bicycle up the stairs to his apartment. On Thursday night, he rode the bicycle to the 19-tonne refrigerated lorry he had rented three days earlier, and stowed it in the back.

Last January 27th, a motorist asked Laouaiej-Bouhlel to move his vehicle because he was blocking traffic. The Tunisian threw a wooden pallet at the man, cracking his skull. He was convicted on March 24th and given a six-month suspended sentence.

Jean-Baptiste Ximenes, the wounded motorist, posted this message on Facebook: “The terrorist who did the attack in Nice is the one who attacked me with a baseball bat. He should have done six months in prison. Where is justice? The world is small, so stop letting these guys on the loose.”

Neighbours said Laouaiej-Bouhlel talked constantly about his estranged wife. A fellow Tunisian, a 37-year-old painter who is also called Mohamed, told Nice Matin that the killer was “originally a normal guy, who beam more and more aggressive because of his personal troubles.” The bank had refused him a loan, and he couldn’t meet alimony payments. “I really think he was overwhelmed by his problems and blew a fuze,” Mohamed said.

Neighbours also said they thought Laouaiej-Bouhlel was an alcoholic. He took a bottle of wine to a young woman with whom he watched a football match during the Euros.

Laouaiej-Bouhlel may have been what French experts call a “hybrid terrorist” - mentally unhinged and stimulated by Islamist rhetoric. In this, he would resemble Salhi, or the madman who attacked a Paris police station with a hatchet, wearing a fake explosives belt, on the first anniversary of the Charlie Hebdo killlngs.

‘Crazy and a terrorist’

“You can be crazy and a terrorist,” the criminologist Alain Bauer, a close friend of Prime Minister Manuel Valls, told Le Figaro.

In December 2014, a half-Algerian, half-Moroccan man ran over 13 pedestrians in Dijon, shouting “Allahu Akbar” at the wheel of his car. The authorities said he was insane.

Now Laouaiej-Bouhlel has killed 84 people using the same method. Through the sheer number of casualties, his crime more resembles the November 13 attacks in Paris, which required more men and organisation.

According to Le Monde, investigators believe Laouaiej-Bouhlel may have had some contacts in common with Omar Diaby, a radical preacher of Senegalese origin from Nice, also known as Omar Omsen, and who is now in Syria with the al-Nosra front, a rival group to Islamic State.

In an interview with France 2 television broadcast last month, Diaby justified the killing of civilians “as reprisals for French airstrikes against women and children.”

Jihadists had planned to attack an earlier large public gathering in Nice, the carnival in February 2014. The plot, by the so-called “Cannes-Torcy network” was foiled in extremis, with the arrest of a 24-year-old identified in newspaper reports as Ibrahim B.

The young man was flagged to French authorities when he attempted to pass for a Syrian refugee at the Turkish-Greek border. French police arrested him weeks later at his father’s apartment, just three days before carnival started. He had hidden explosives in the stairwell of the building, and is believed to have been the first aspiring suicide attacker in France. The massacre in Nice was postponed for two and a half years.