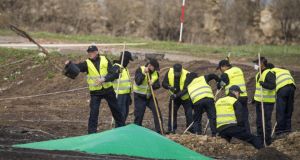 Dutch and Malaysian investigators digging on the site where the bulk of Malaysian Airlines flight MH17 was shot down in the Donetsk People’s Republic. Photograph: Odd Andersen/AFP/Getty Images

A Dutch medical anthropologist has been fired from the forensics team tasked with identifying the bodies of those killed aboard Malaysia Airlines Flight MH17 – after he used photographs of the victims’ body parts without authorisation to illustrate a public lecture.

Prof George Matt of Leiden University, an international authority on physical anthropology, used the photographs in a talk to medical students in Maastricht earlier this month – at which he is also accused of making incorrect observations about the cause of the crash.

The lecture prompted a furious reaction from the families and friends of the dead. Evert van Zijtveld of the MH17 Air Disaster Association said showing the photographs in public had been “shameful and very shocking to the victims’ relatives” and added to their grief.

The furore led to a statement in parliament yesterday by Justice Minister Ard van den Steur, in which he described the lecture as “completely inappropriate and in bad taste”, adding: “the collaboration with George Matt has been terminated.”

The chorus of condemnation was joined by Arie de Bruijn, head of the police forensics unit that is leading the multinational identification team, who said it was “unacceptable” that confidential images – including photographs of body parts – had been used in public.

He said that while experts who were members of the team were allowed to share certain information with colleagues, Prof Matt had apparently used the images to explain and illustrate elements of the identification process – without any form of official clearance.

The Boeing 777 jet crashed in eastern Ukraine last July after apparently being hit by a BUK missile allegedly fired by Russian-backed separatists, but Mr de Bruijn said Prof Matt’s lecture had included comments about its cause that were “speculative, untrue and partly outside his area of expertise”.

Although the Maastricht lecture was advertised as open to the public, and attracted an audience of at least 150, Prof Matt said he had believed it was restricted to medical students.

His statement went on: “It appears that other people were there. I hadn’t realised. I’m very sorry to have hurt or distressed victims’ loved ones.”

All but two of the 298 passengers and crew on the flight have been identified, and a team of investigators has been back in Ukraine this week collecting the last of the human remains and personal belongings.