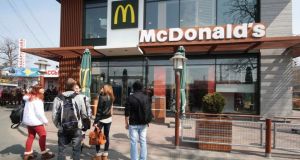 People gather outside a closed McDonald’s restaurant in the Crimean city of Simferopol today. McDonald’s has shut its restaurants in Crimea for “manufacturing reasons”, the US fast food chain said. Photograph: Reuters

McDonald’s announced today it had closed its restaurants in Crimea, prompting fears of a backlash as a prominent Moscow politician called for all the US fast food chain’s outlets in Russia to be shut.

Crimea’s annexation by Russia, which Ukraine and the West do not acknowledge, has worried companies with assets in the Black Sea peninsula as it is unclear how the change may impact upon their business.

While McDonald’s did not mention the political situation in its statement, its decision to shut is likely to be seen as emblematic of the rift in West-Russia relations, now at their lowest ebb since the end of the Cold War.

“Due to operational reasons beyond our control, McDonald’s has taken the decision to temporarily close our three restaurants in Simferopol, Sevastopol and Yalta,” a spokeswoman said.

The Crimean outlets are not franchises, but owned and operated by McDonald’s itself.

The closures follow Geneva-based Universal Postal Deutsche Post’s announcement that it was no longer accepting letters bound for Crimea as delivery to the region was no longer guaranteed.

Economic relations between Russia and Ukraine have worsened since Russia annexed Crimea last month in response to the ousting of Russian-backed president Viktor Yanukovich after months of street protests in Kiev.

Targeted sanctions imposed on a number of prominent Russians by the US and EU have alarmed some foreign investors.

Russia raised the price it charges Ukraine for gas yesterday for the second time this week, almost doubling it in three days and piling pressure on its neighbour as it teeters on the brink of bankruptcy.

Moscow has frequently used energy as a political weapon in dealing with its neighbours, and European customers are now concerned Russia might again cut off deliveries.

Moscow is applying economic pressure in other areas, while Ukraine has responded.

Russian riot police last month took control of a factory belonging to a Ukrainian confectionery magnate in the city of Lipetsk as part of an investigation into the company’s affairs, the Ukrainian government has said.

Petro Poroshenko, a billionaire oligarch known as the Chocolate King, is the front-runner in Ukraine’s presidential election, which is set for May 25th.

Ukraine this week temporarily banned seven Russian food companies from selling some of their products on Ukrainian territory.

McDonald’s said it hoped to resume work as soon as possible but said it would help relocate staff to work in mainland Ukraine, signalling it did not expect its Crimean businesses to reopen in the near future.

The company’s decision was welcomed by the deputy speaker of the Russian parliament, Vladimir Zhirinovsky, known for his anti-western rhetoric, who demanded that McDonald’s pull its business out of Russia entirely.

“It would be good if they closed here too ... if they disappeared for good. Pepsi-Cola would be next,” Russian media quoted Mr Zhirinovsky as saying.

McDonald’s, which currently operates more than 400 restaurants in Russia, was the first international fast-food chain to tap the Russian market when it opened in Moscow’s Pushkin Square before the collapse of the Soviet Union.

That branch had the highest sales and served the most customers of any McDonald’s outlet in 2012.

A Russian backlash again McDonald’s products would have a significant impact on company profits. McDonald’s sees Russia as one of its top seven major markets outside the US and Canada, according to its 2013 annual report.

However, Russian moves to shun McDonald’s burgers could easily backfire, according to Russian newswire RBK, which detailed Russian food suppliers to McDonald’s that would suffer as a result.