London Letter: When is a wrongful conviction not a miscarriage of justice?

Victor Nealon was wrongly jailed for 17 years, but he is not being compensated 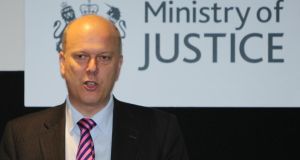 British justice secretary Chris Grayling has now ruled that Nealon has “not suffered a miscarriage of justice” as defined by law. Photograph: Sean Dempsey/PA Wire

Victor Nealon has been denied compensation. The Dubliner left Wakefield Prison in Yorkshire in the days before Christmas last year with less than £50 (€63) in his pocket, having spent 17 years in jail for a wrongful conviction for attempted rape.

His life spiralled into a nightmare after a 22-year-old woman was attacked in Redditch, south of Birmingham, on her way home from the Rackets nightclub in August 1996, after celebrating her birthday.

“She was very drunk. About half an hour before she left she noticed that a man, who was about 20 feet away, was staring fixedly at her with what she interpreted as sexual interest,” Lord Justice Fulford said in a court of appeal ruling. “She particularly noted his intense gaze and a lump that was like a scratch on his forehead. He was notably older than most of the other men at the nightclub.”

She punched and kicked her assailant, who then ran away.

Distressed, she was taken to her home. Within 90 minutes, police had taken her clothes for forensic analysis.

Both women were vague about identifying the attacker. The victim’s friend said she had had “just a few seconds” to look at the man’s face, and the light under the bridge was poor.

“She was sure, however, that it was the same person who had been staring at [the victim] in Rackets, and she said he was wearing the same black trousers and black paisley panelled shirt.

“She described him as stocky and about the same height as [the victim when] wearing heels,” said Lord Justice Fulford, adding that she said he had been “clean-shaven with strange, very small lips and an evil-looking face”.

Detectives spoke to other people who had been in the nightclub.

Three recalled a man who wore a distinctive patterned shirt. The doorman remembered admitting him, but believed his accent was Scottish.

Differences existed among testimonies, as is typical with such attempts at recall, but all agreed on the existence of the forehead lump – a disfigurement, rather than anything temporary caused by a blow.

Nealon, then a 36-year-old postman, does not have such a disfigurement, but he did have acne – something that appeared sufficient to West Mercia police to justify placing him in an ID parade.

There, he was identified as having been in the nightclub by three witnesses – though not by the victim, who did not inspect the parade, nor by her friend, who had provided details for a drawing of the assailant.

The Dubliner said he had been at home that night, watching videos. However, detectives’ suspicions were heightened when he gave the wrong film titles when asked to name them.

Given a life tariff, with a minimum recommendation of seven years, Nealon was repeatedly refused parole because he refused to admit to the crime. He faced similar rebuffs from the criminal cases review commission.

Eventually, DNA tests on the woman’s clothing carried out by Nealon’s solicitor, who took up the case in 2008, showed traces of semen from another man, who has yet to be identified.

A “real possibility” existed, said the commission, which was set up after a string of wrongful Irish convictions in the 1970s, that judges would find his conviction to have been unsafe.

Unsafe it was, but 17 years in jail does not merit compensation, it seems. British justice secretary Chris Grayling has now ruled that Nealon has “not suffered a miscarriage of justice” as defined by law.

The decision is “a nonsense”, says Nealon’s solicitor, Mark Newby.

“His conviction was quashed on the basis that someone else was responsible, so why should he not be entitled to compensation?”

Seventeen years on, Nealon, who was repeatedly segregated for refusing to co-operate with the authorities, lives in temporary accommodation in Birmingham, struggling even to begin to rebuild his life.